FRAMINGHAM – The League of Women Voters of Framingham is hosting its third candidates’ forum for the 6th Middlesex State Representative race on Monday, August 22 at 7 p.m. in the Costin Room at the main branch of the Framingham Public Library.

All of the candidates for 6th Middlesex State Representative have been invited and confirmed their attendance, said the League in a press release.

There are 3 Democrats on the ballot on September 6. There are no Republican candidates. The winner of the Democratic primary on Sept. 6 will be the only name on the ballot in November.

Individuals not enrolled in any political party can pull a Democratic ballot on September 6.

By pulling a Democratic ballot, it does not enroll you in the Democratic Party but it does allow you to choose between the three candidates.

The League of Women Voters of Framingham is a non-partisan, grassroots organization that supports and opposes issues, but not candidates or political parties. The organizations strives to protect, educate and engage voters. New members are welcome.

This forum will be a traditional candidate forum, with each candidate having the same amount of time to answer the same questions.

“Our aim is to offer an event that encourages informative answers so that voters can make an informed vote in September,” said the League in a press release. 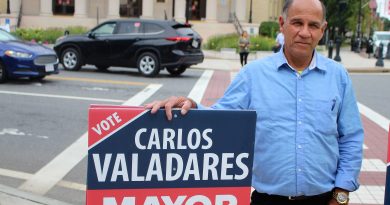