FRAMINGHAM – The City of Framingham had the seventh highest rate of coronavirus over the last 14 days, according to the Commonwealth of Framingham.

One hundred new cases within 14 days, and the Commonwealth of Massachusetts designated Framingham as one of 9 high-risk communities for the coronavirus on Wednesday.

City of Framingham Health Director Sam Wong said one of the reasons for the increase in new COVID-19 cases is gatherings.

Wong told the Board of Health last week, he wants residents to not host or attend parties.

“We are seeing cases happening because of gatherings” said Wong to Board of Health on Thursday night. “And because the weather is warm, and people are going out and having parties. We are seeing some cases from that.”

SOURCE also uncovered that contact tracing efforts by the state and the city are showing some of those gatherings are religious gatherings.

Wong told the Board of Health some of the new coronavirus cases are “related to work places.”

Contract tracing efforts are also showing that new cases also have ties to retail stores in Framingham, like Walmart.

“We saw some cases from personal care services,” Wong told the 3-member Framingham Board of Health last week.

Wong said the walk-up testing programs are being set up in neighborhoods where the City is seeing an increase in positive coronavirus cases.

That means that some of the new cases are happening in Districts 7-8-9 of the City of Framingham.

“Parks & Recreational facilities attracting a large crowd on a daily basis, which includes the skate park and the basketball courts,’ Wong told the Board of Health on Thursday night. “We are seeing a large number of people congregating, especially youth, with no face covering and no social distancing on a regular basis now.”

Wong met with Parks & Recreation staff on Friday morning, and by Friday afternoon the Skate Park was closed, and several basketball nets were removed in the City of Framingham.

Also on Friday afternoon, Mayor Yvonne Spicer made her first statement since the Commonwealth of Massachusetts deemed Framingham a high-risk community at 6 p.m. on Wednesday.

Wong said it could be a contributor factor to a number of cases, but did not say cases were tied to the recreational facilities.

Health Director Wong said his office plans to work with Framingham Police to step up enforcement of gatherings.

Wong told SOURCE on Wednesday the City was focused on three things to reduce the spread of the coronavirus.

Wong said he knows he sounds like a ‘broken record,” but people need to wear face coverings when in public, avoid large gatherings, and wash their hands frequently.

The City had considered free drive-thru testing at Adessa, but it fell through. The City has been talking with Staples for a drive-thru site too.

Framingham was named one of 17 communities in the Commonwealth’s Stop the Spread testing program earlier this month. The program provides free coronavirus testing for all, even those with no symptoms and no insurance.

Being named a red community of a high-risk community means the Commonwealth will provide some supports.

One support the City could use is outreach to individuals in the City for whom English is not their first language.

On Friday, the Mayor issued reverse 9-1-1 calls in English, Spanish, & Portuguese on Friday afternoon. It may have been her first or possible only her second such call in multiple languages to all residents since the pandemic began.

According to the City of Framingham, 34% of the coronavirus cases are individuals who are Hispanic, as of Monday, August 24.

And, according to City of Framingham data, only 28% of the cases in the City are individuals whose first language is English.

During a pandemic, having essential information in your language can mean life or death.

“When the Spanish flu pandemic of 1918 hit, people with poor literacy were much more likely to transmit the disease and die,” reported Healthaffairs.org. “Spanish speakers were found to be at the greatest risk of exposure to H1N1 during this outbreak.”

Not all of the information the City of Framingham has released on the coronavirus has been in a language other than English.

Framingham is home to a large Brazilian and Hispanic population, but also hope to large groups of Chinese, Russian, and other Asian populations.

A Bookings study showed that those who speak another language, and those of a lower socio-economic status are hit the worst during a pandemic.

The City of Boston, a yellow community, has been offering up-to-the-minute coronavirus information in more than a dozen languages.

The City of Lawrence, where a majority of the population is LatinX and speaks Spanish, has been offering every important notice in both English & Spanish.

If you visit the City of Framingham’s COVID-19 portal, the information is only available in English, except for a translate button, which allows for translation in dozens of languages.

The City does not directly translate all of its important COVID documents into Portuguese and Spanish, like the Framingham Public School system does.

“Navigating healthcare can feel like a maze in the best circumstances, and during this pandemic it can mean the difference between flattening the curve and creating a new hot spot of infection,” said Equal Rights Center Executive Director Kate Scott. “If LEP (limited English proficient) individuals are unable to obtain information about COVID-19 testing, we’re all at greater risk.”

In full transparency: SOURCE also only publishes in English, and has a translate button that allows for translation in 17 languages, via an app. 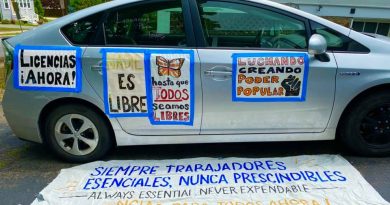 Framingham Caravan Thursday To Fight For Driver’s Licenses For All