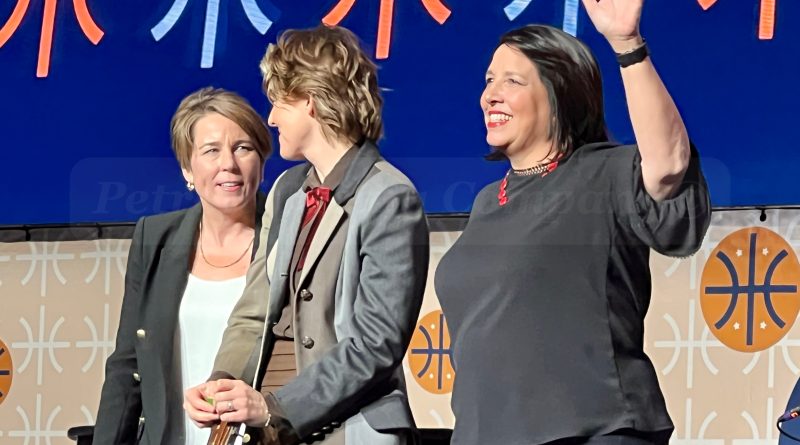 All of the state’s top office holders but two – Secretary of State and the Speaker of the House of Representatives – are now women.

Senator Karen Spilka was sworn in on Wednesday for another term, and then re-elected as Senate President.

“I was the first woman Senate President to have the honor and privilege of swearing in the first woman elected Governor of Massachusetts—and the first woman team of Governor and Lieutenant Governor. I cannot let this moment go by without recognizing the generations of women who came before us, who never stopped hoping for, or working towards, this momentous day. I join them in celebration and look forward to working with the Healey-Driscoll administration,” posted the Ashland Democrat, who represents Ashland, Natick, & Framingham.

The Healey-Driscoll team held a celebration at TD Garden on Thursday night. The two sported high-top sneakers with the moving the ball forward logo. Grammy award-winning singer Brandi Carlile performed at the celebration party, which was privately funded.

“I wanna say that I really admire how much she’s put herself out there. I admire her voice, not just her singing voice, of course, but also the voice she gives to so many women. So whatever walk of life may have felt vulnerable, may have felt marginalized, may have been made to feel less than tonight,” said Governor Healey about her favorite singer Carlile.

The Inauguration Committee was chaired by Bryan Rafanelli, an event planner and finance co-chair for Healey’s campaign, Barbara Lee, who has helped elect 197 women in 33 states, including the first woman Vice President of the United States and every sitting Democratic woman Governor and U.S. Senator.

“Maura Healey is a dedicated public servant, with drive, experience, passion, and compassion. She has all the qualities that great governors have—including the ability and commitment to bringing people together, find common ground, and get real results. She will be an extraordinary and accomplished governor. In 1776, Massachusetts’s Abigail Adams, the wife of one of our nation’s founders, wrote a letter to her husband John Adams, urging him to ‘remember the ladies.’ She wrote that if he didn’t, the women of our nation would start a revolution. And now, we have. Since our nation’s founding, Massachusetts has elected over 60 men to serve as governor. With this election, Massachusetts voters have thrown open the doors of the old boys club to a new generation of women’s leadership … Governor Healey and Lt. Governor Driscoll will prove that girls can do anything—and everything. They make a great team, and will open more doors for women in every arena. I can’t wait to see them shine on Beacon Hill and across our state,” said Lee.

Also on the Healey-Driscoll Inauguration Committee was Framingham District 4 School Committee member Adam Freudberg. On Thursday night, he was checking in VIPs and was also on the floor for the celebration, where there as a lavish spread, and two bars for attendees.

Framingham District 2 City Councilor Cesar Stewart-Morales, who was attending with his company Vineyward Wind, was also on the floor for the celebration.

FRAMINGHAM – The City of Framingham will have four state representatives, not three, as of January 4, 2023.

All four state representatives were sworn in on Wednesday, January 4, 2023 at the state house.

Read more about the four of them and why Framingham now has four not 3, here.

Still a Couple of Swearing In Events To Go

Gov. Healey is slated to administer DiZoglio’s oath of office. Congresswoman Lori Trahan will deliver remarks and Governor’s Councilor Eileen Duff will emcee the event, which is free and open to the public.

Attorney-General-elect Andrea Campbell will be sworn in at the Boston Convention and Exhibition Center. The ceremony will take place on Wednesday, January 18.

FRAMINGHAM – 2023 is an election in the City of Framingham.

The preliminary election, if needed, is Tuesday, September 19, 2023.

At-large City Councilors are elected for a 4-year term.

Library trustees are elected for a 4-year term.

Mayor Charlie Sisitsky’s term does not end until 2025. He was elected to a 4-year term in November 2021.

The POLITICAL CORNER column is typically only published during election season. The column appears on Saturdays. 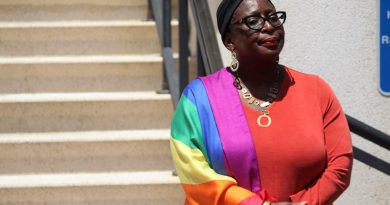 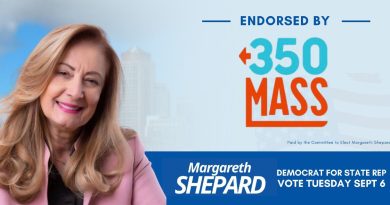 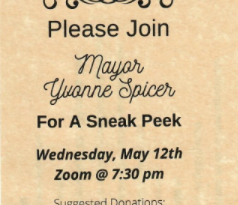 Spicer Campaign Hosting May 12 Event: Is It A Mayoral Re-Election Kickoff?