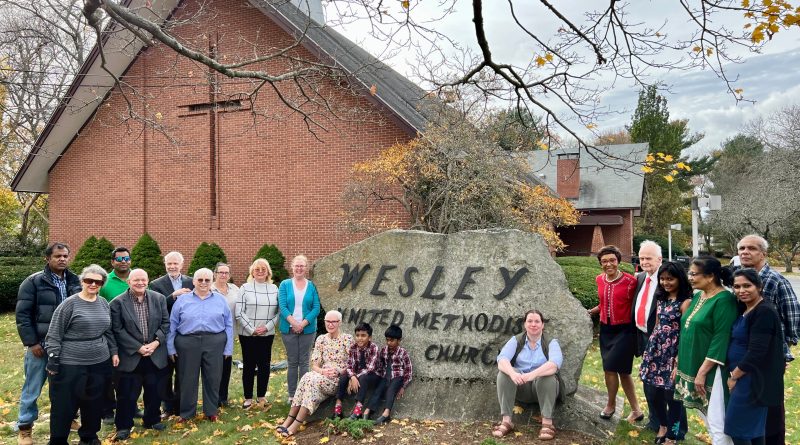 FRAMINGHAM – Julie Tebo has been a member of the Wesley United Methodist Church for 6 decades.

Dave Hartshorn has been with the church, since it was at the site of the Dunkin’ Donuts on Route 126.

The two are the last of the members, who came from the downtown church, before a new church was built on Beacon Street.

“I was on the building committee that built this building,” said Hartshorn, a Framingham resident and an engineer by trade. “A lot of the engineering work I did on the church.

The rock that stands in front of the church, was unearthed during the construction.

The church opened for parishioners in 1966.

Fifty-five years later, and the last Methodist service was held on November 7, 2021.

Last Sunday, November 6, 2022, members of what was the Wesley United Methodist Church gathered for the last time in front of the rock – that iconic rock – in front of the church building.

The rock is too big to be moved.

Today, November 12, the letters were scheduled to be removed from the rock, said Tebo.

Rev. Heather Kattan is hoping to create art from the letters for their new house of worship.

“Our first service in this building (Beacon Street) was on Easter Sunday in 1966. Our pews weren’t ready. So we borrowed chairs from the funeral home for our first service. It was exciting for me. I was only eight, well almost eight. And it was exciting. But this is my 60th year,” said Tebo to SOURCE.

“I remember when we were downtown in Framingham, where the Dunkin’ Donuts is across from the Catholic church,” said Hartshorn. “One of the reasons we moved up here (Beacon Street) was at that time the Catholic church had so many members and Masses started around six in the morning. And to get to church, you literally had to walk two blocks to get to our church because there were so many cars filling the parking lot and out on the streets of downtown Framingham for the Catholic Church. Now you go down there, and there’s five or six cars in the parking lot.”

What became Wesley United Methodist Church began as the First Society of Methodists in South Framingham in 1869.

Wesley then became the Irving Street Methodist Episcopal Church in the late 1800s.

In 1915, when the church moved to a building at Lincoln & Concord Streets, it was renamed the First Methodist Episcopal Church of South Framingham.

When they moved to Beacon Street in 1966, they became the Wesley United Methodist Church.

Rev. Kattan said what she will miss the most from the Beacon Street location is “memories.”

“The times of meals and fellowship in the halls, friendship that were created and nurtured, and also how important events in people’s lives happened there. The stained glass cross is an important piece that we just cannot take with us to the new location. We have tried to bring elements of the Beacon Street building over to the new location. We have the altar table in the sanctuary, pianos that were there, and historical pieces and pictures. It is like how we are not just going to throw away the metal letters, but use them to create a new piece of art for the Water Street building. It took a long time, but we knew that we valued the mission of our food ministry more than having two large buildings, so we made the very difficult decision to give one up to be of better service,” said Pastor Kattan.

Tebo said over the decades her favorite memories are the “people.”

“I was taught by the best Sunday School teachers and one of my other most favorite was my choir director, Elsie Meeker. She died, just died a couple years ago at the age of 100. She was a phenomenal person.”

Tebo said she got married at the church on Beacon Street, but she said she was disappointed she never got to do photos in front of the “rock,” as it rained.

“Last year, for my 44th wedding anniversary, it was a gorgeous day, so I put on my wedding gown and I came here and had a photo shoot with my maid of honor, my sister,” said Tebo. “It was awesome, and so exciting.”

Rev. Kattan said the new combined Methodist Church is “relaxed with a friendly atmosphere,where we have all different kinds of people.”

As Pastor she said the church’s main “Our main “goal is to use our faith to build better lives for ourselves and our community. We currently have a food pantry, called Faith in Food, that arose out of the need we saw during the time in lockdown.”

All are welcome to join services at 10 a.m. on Sunday mornings at 360 water Street in Framingham. 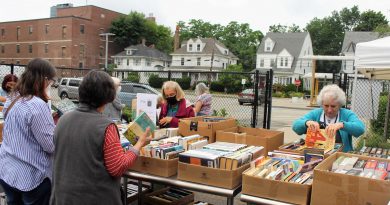 UPDATED: Framingham Public Library Plans to Re-Open in August For Computer Use