In full transparency, the following is a press release from the US Justice Department. No photo was released.

BOSTON – Two former employees of eBay, Inc. were sentenced today, October 11, for their roles in a cyberstalking campaign targeting the editor and publisher of a newsletter that eBay executives viewed as critical of the company.

Stephanie Popp, 34, of Louisville, Ky., eBay’s former Senior Manager of Global Intelligence, was sentenced to one year and one day in prison and two years of probation. Stephanie Stockwell, 28, of Redwood City, Calif., the former manager of eBay’s Global Intelligence Center, was sentenced to two years of probation, with one year to be served in home confinement.

Gilbert and Zea are awaiting sentencing.

Between approximately Aug. 5, 2019 and Sept. 6, 2019, Stockwell, Popp and their co-conspirators at eBay agreed to engage in a harassment campaign targeting a husband and wife in Natick, for their roles in publishing a newsletter that reported on issues of interest to eBay sellers. Senior executives at eBay were frustrated with the newsletter’s tone and content as well as the substance of comments posted beneath the newsletter’s articles. The harassment campaign arose from communications between those senior executives and Baugh, who was eBay’s senior security employee.

In August 2019, the defendants and their co-conspirators executed a three-part harassment campaign intended to intimidate the victims and to influence their reporting about eBay. The campaign included sending anonymous and disturbing deliveries to the victims’ home; sending private Twitter messages and public tweets criticizing the newsletter’s content; threats to visit the victims in Natick; and traveling to Natick to surveil the victims and installing a GPS tracking device on their car.

Stockwell, at Baugh’s direction, purchased a laptop for use in harassing the victims, and used an anonymous email account to order online live spiders and a prepaid debit card to purchase a late-night pizza delivery to the victims’ home.

Other deliveries ordered to the victims’ home included a book on surviving the death of a spouse, a bloody pig mask, a fetal pig and a funeral wreath. Stockwell also prepared an eBay “Person of Interest” report for the Bay Area—a fictitious list of potential suspects to provide to the Natick Police Department to deflect the police from suspecting that eBay employees were actually harassing the victims.

As part of the second phase of the campaign, Popp sent private Twitter messages and public tweets, drafted or approved by Baugh, Gilbert, or Cooke, criticizing the newsletter’s content. The threatening Twitter messages were written as if they had been sent by eBay sellers who were unhappy with the victims’ coverage in the newsletter.

Some of these messages posted the victims’ home address and threats to show up at their home.

The harassment also featured Craigslist posts inviting members of the public to experience sexual encounters at the victims’ home. 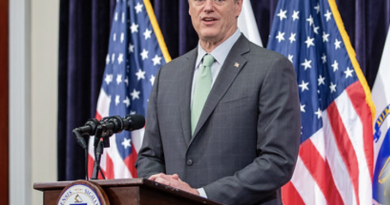