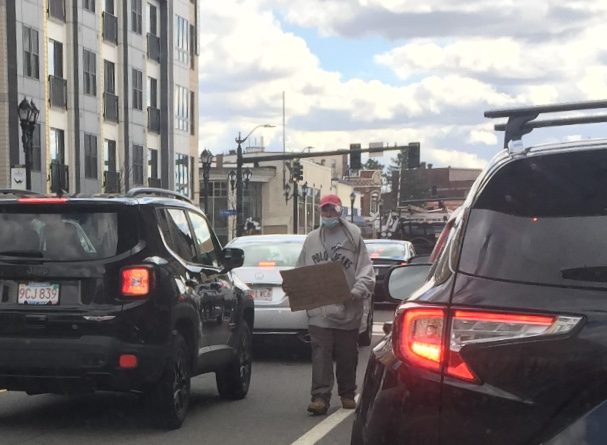 Editor’s Note: An earlier version stated the ordinance needed to be reviewed by the Massachusetts Attorney General’s office. The AG’s office said no review is required as Framingham is a City form of government.

FRAMINGHAM – The 11-member City Council passed an ordinance last Tuesday to restrict panhandlers in the City of Framingham.

The ordinance has been signed by the Mayor and is effective immediately.

Frustrated with panhandlers walking between traffic asking for money, knocking on driver’s windows, and even reaching into vehicles, the City Council passed the ordinance which restricts panhandling on specific roadways, for safety reasons.

The City of Framingham new solicitor Kathryn Fallon reviewed the ordinance and wrote:

“The city solicitor has re-drafted this in a way that is not without risk,” said District 8 Councilor John Stefanini. “There is still some risk attached to it. But I think the risk has been reduced even further than where it was prior.”

“I happen to think the benefit here outweighs the risk,” said Rules & Ordinance subcommittee chair Stefanini. “And now we have something here the solicitor is comfortable with.”

Stewart-Morales said he has seen first-hand the issue at Route 30 and Whittier.

“We started with this ordinance broadly, and used the City of Boston as a template,” explained Councilor Stefanini, who said it was narrowed multiple times to certain specific streets and areas

Councilor Stewart-Morales said overall he was pleased by the new ordinance.

“This is a very contentious issue,” said District 5 City Councilor Noval Alexander. he said he even heard from an Ashland resident about the aggressive solicitation.

“This is a human issue at the heart of it, so it needs some compassion,” said Councilor Alexander.

Alexander said he wanted the City to look into a program to deal with homelessness and panhandling in a “humane way.”

Alexander also wants to discourage residents and drivers from donating money and for the City to look into signage in regards to that.

“These people are imported here,” said Councilor Long., who said she has seen them at 6 a.m. running between traffic, including lanes.

“Someone is going to hit the jackpot and kill one of these people, and we are going to get sued,’ said Long.”the driver is going to be the victim,” said Councilor Long.

Councilor Long said if they are truly “homeless:” they would not be running around with their Nike or Apple watches.

“The solution is to stop giving them money, said Councilor Long.

After including the additional roadways, the vote was unanimous 11-0.

Councilor Stefanini said the Police Department and Chief Lester Baker are planning an “aggressive education program” on the new ordinance.

In addition to the fines, police can remove the “aggressive panhandlers” from the roadways listed above.