FRAMINGHAM – “To ensure continued access to oncology infusion and radiation oncology services for current patients, I am pleased to announce that MetroWest Medical Center and Tufts Medicine are in exclusive negotiations for Tufts Medicine to provide a wide range of oncology services at MetroWest Medical Center, including hematology oncology, radiation oncology and infusion services,” announced TenetMass CEO Carolyn Jackson tonight at the hearing.

SOURCE first broke the news that Tenet plans to close the oncology departments in April. Paperwork filed with the state indicate that the departments could close by Halloween.

Negotiations do not mean a deal that is inked, but talks.

City of Framingham Mayor Charlie Sisitsky spoke after the announcement of the negotiations and said he was unaware of them.

The Mayor read his letter he submitted to the Massachusetts Department of Public Health last week.

The City Council Chair Phil Ottaviani Jr. and the President of the Massachusetts Nurses Association Katie Murphy, a Framingham resident, said they too were unaware of this negotiation with Tenet and Tufts Medicine.

Senate President Karen Spilka, who was instrumental in having the hybrid hearing, which meant MetroWest residents could attend in person and provide testimony released a statement on Thursday.

“I was very pleased that at the Department of Public Health hearing regarding the planned closing of oncology services at Framingham Union Hospital, Tenet Healthcare and TuftsMedicine announced great progress in a partnership to keep those services in place,” said Senator Spilka (D-Ashland).

“Over the past ten weeks, I have been in close touch with MetroWest Medical Center about alternative solutions to ensure that the full scope of these services remain open and accessible in Framingham and MetroWest. I also worked with the Department of Public Health to ensure the hearing was held in person in Framingham with adequate notice, and that a call-in option was available for those who couldn’t be there. Thank you to the patients, residents, nurses and doctors who showed up and raised their voices to support for these important services, and thank you to the other local leaders for your advocacy,” said the Senate President.

“At the hearing, Tufts Medicine and Tenet Healthcare heard how passionate our community is about Framingham Union Hospital, and I look forward to a productive partnership that sees the hospital not only survive but thrive,” said Spilka.

Paul Viridian, speaking with tears in his eyes, said he would not be at the hearings peaking if not for the cancer center he said he was 7 years cancer free, and that having the cancer center 7 minutes from his home was important for his treatment.

Several doctors spoke about why the MetroWest Medical cancer center was needed in Framingham, especially since there are many low, income, non-English speaking immigrants who use the center.

There are several speakers in the Nevins hall scheduled to speak, including all three candidates for the 6th Middlesex District state representative seat.

There are more than 100 individuals in Nevins Hall at the Memorial Building. 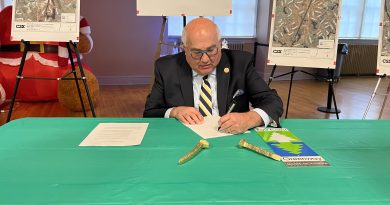