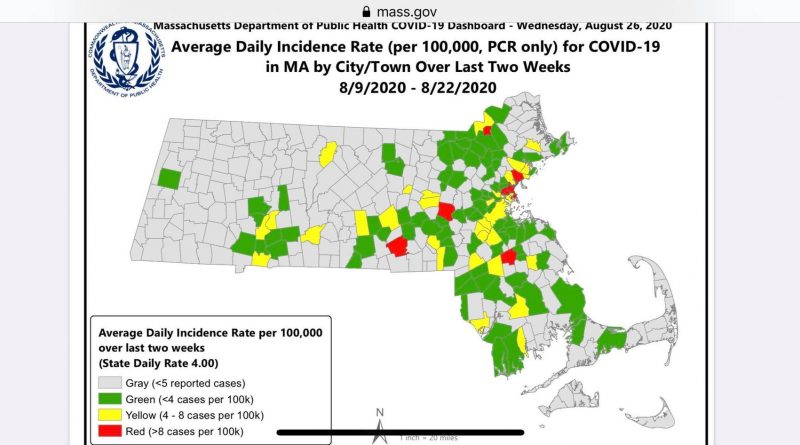 Editor’s Note: SOURCE originally posted this report at 10:35 a.m. It was updated in the morning with quotes from Framingham Health Director Sam Wong. Last updated after 6 p.m., when the state named Framingham a high-risk community.

UPDATED: The Commonwealth of Massachusetts announced at 6 p.m. today, August 26, that Framingham is now a high-risk community for COVID-19.

FRAMINGHAM – Last week, the City of Framingham was yellow, a moderate risk community. But there is a strong possibility Framingham will become a high risk or red community today.

A red or high-risk community has more than 8 cases of coronavirus for every 100,000 people.

“It is likely that Framingham will move into the red category this afternoon or in near future.  We do not believe a ranking system that only use a single metric is truly providing a full picture of the status of the pandemic in any given community.  That being said, it is the system that we’re in at this point,” said Framingham Health Director Sam Wong to SOURCE this morning, August 26.

Wong said yesterday, during the mayor’s community zoom hour, that the City of Framingham was seeing a “small surge of new cases.”

Wong said the late august surge is not like the first wave the city of Framingham expereinced this past spring, but that it was “concerning.”

He said a “whole community effort’ is needed to stop the coronavirus.

He said he knows he sounds like a ‘broken record” but people need to wear face coverings whenin public, avoid large gatherings, and wash their hands frequently.

“We are seeing an increase in new cases that we believe are partially attributed to the increase in testing capacity in the city. The overall percent positivity rate has not increased substantially. It is still hovering around 2%.  We also think that gatherings may be a contributing factor as well,” said Wong.

Over the last two weeks, Framingham High held its Class of 2020 graduation. There were numerous parties, some make-shift proms with limos before students headed off to colleges, and many out-of-state trips for families to drop their students off at their colleges & universities.

In regards to the large gatherings, Wong said “we are stepping up in our public messaging on gatherings.  We have also developed a protocol internally to respond to complaints related to gatherings on private properties.  The PD (police department) responds to complaints on gatherings, and the health department follows up with enforcement actions using police reports.”

Framingham is one of 17 Stop the Surge communities designated by the Commonwealth of Massachusetts. Those communities have free testing, with no insurance needed.

Marlborough is also a Stop the Spread community – one of the first 8.

City of Marlborough has several free testing sites including one at an elementary school in a trailer.

Framingham had a drive-thru testing site at Keefe Technical High School through last Friday, but it stopped, as Keefe Tech is preparing for the re-opening of school in -person.

There is now only a walk-up (no parking) free testing site at Amazing Things Arts Center on Hollis Street (Route 135) on Tuesdays and Thursdays from 3 to 6 p.m.

SOURCE asked Wong what is the City’s plan to replace Keefe Tech and open a second free testing site in the City.

“In terms of a testing site, we need a space that is large enough to for a busy drive-through testing site to function properly. There isn’t a lot of such locations in Framingham (we identified maybe 6 or 7 of such locations),” said Wong. “We have been working with owners of these properties across the city that we think could meet the requirements.  We are still going over the details at this point for a chosen location.”

If Framingham moves to red, it means an impact on high school sports, and possibly youth sports.

The new DESE guidelines would require districts in the highest risk level, red, to postpone their seasons and not hold practices.

Communities that start the school year remotely, like Framingham High, need a School Committee vote for sports or extracurriculars. There is an August 26 agenda item on sports and extracurricular activities.

Keefe Technical had already approved sports, as school was starting with students in the classrooms.

Framingham has been testing more residents, especially due to the free testing, which could be another reason for the spike in positive results.

But Framingham has also been a hot spot for parties and large gatherings this summer.

“Whether we ‘go red’ this afternoon or not, we plan to increase our efforts on several areas,” said Dr. Wong. 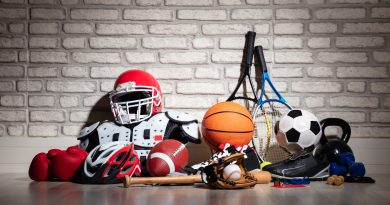