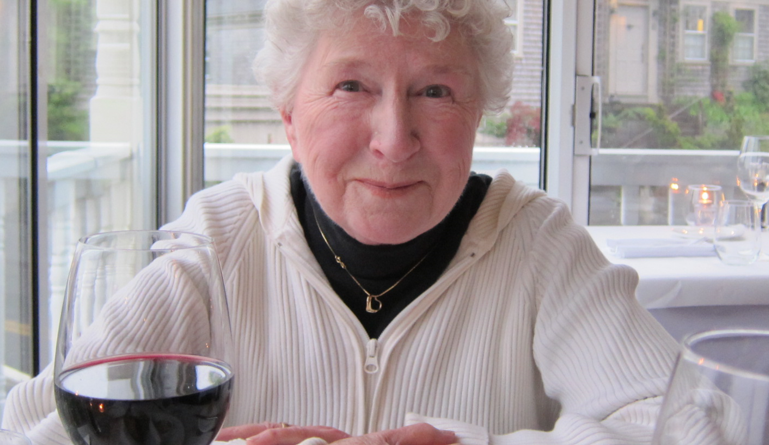 Those that knew Kit realized she was a woman of incomparable strength, striving for the best for herself and for those that depended on her. She had a special grace, one that she perfected over a lifetime.

Born in the Bronx, NY as Catherine Teresa Fallon, Kit was a child of the Depression.  Her mother, Helen Feeney Fallon, died in childbirth when Kit was very young.  Soon after her mother died, the baby, her younger sister Nellie, died as well.  Afterward, her father John Fallon returned to Ireland with Kit’s older sister Nancy, leaving Kit with her relatives, Cecilia and Michael Dowd.

Kit grew up in Astoria, NY with her cousins, Cecilia (Sis), Jim, George, and Bob.  Later, she would remember Cecelia Dowd always working, often cooking, and always with a tool in her hand to fix something in one of her rental apartments.

She would remember World War II, the rationing, and the worrisome time her cousins spent away to fight the war.  And she would remember simple joys — the nickel that would get you an entire afternoon at the movies.

At Queens College, while studying English literature and writing, Kit met the love of her life, Edwin Segarra, at a party her sorority threw with his City College of New York fraternity.  They would dance the mambo to jazz at New York’s Central Plaza and go on dates on the boardwalk at Rockaway Beach.  Kit’s family wasn’t at all pleased she was dating a Latin man from the working waterfront of Long Island City, but with her characteristic determination, she did anyway.  Right after graduation, they married and moved to Massachusetts, where Ed took his first job as an electrical engineer.  They adjusted to the quieter pace of life there, but their New York hustle came handy.

When living in Sudbury and Framingham, Kit and Ed met the fast friends that joined them on their journey through life — Art, Joan, Marge, Ralph, Peggy, Walt, Betty, Abe, and so many more that shared the ups and downs of creating a safe place for their families.  Kit had the big family she always wanted.  Her children Lisa, Dan, Steve, and Lauren arrived, and then in due time, her grandchildren Tom, Cole, Artem, and Jocelyn.  Through it all, Kit would always be gracious, always elegantly dressed, always there to listen, always setting an example of how to treat people, and always giving the best of her strength to others.  Kit was love itself come to visit our world.

Kit and Ed retired early, and Kit was able to pursue her literary interests, create her cloisonné work in copper and glass, and tend the garden that was her sanctuary and her connection to the larger spiritual unity.  Kit and Ed would visit grandchildren, tour the Cape and the Berkshires, pursue photography and painting, and of course, each other.  Kit studied tai chi to expand her mind, body and spirit, and through the study made friendships that had deep meaning for her.

Ed and Kit were adamantly determined to remain independent and live on their own terms, and they did just that until almost the very end, when even the fast-walking New York girl finally had to slow down.

In her journal, Kit had recently written out this quote from RW Raymond: “Life is eternal and love is immortal, and death only a horizon, and a horizon is nothing save the limit of our own sight.”

And at this moment, Kit would want us to remember all that was best in her full life: joy, friendship, and love. And she would remind us that love does not end.

Family and friends will gather to celebrate Kit’s life with a memorial service at the McCarthy, McKinney & Lawler Funeral Home, 11 Lincoln St. Framingham, on Sunday, April 10 from 2 to 4 p.m.

Kit’s ashes will be buried later in a private ceremony, in a forest in the Berkshires, a place Kit and Ed loved. 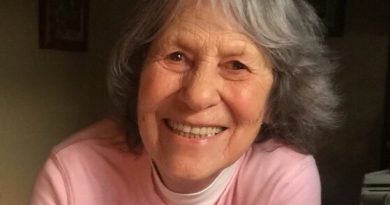 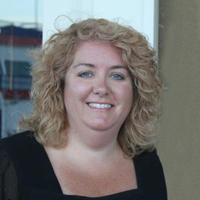 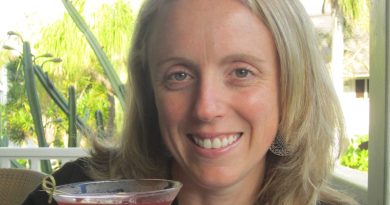