The following is a press release from the Baker-Polito administration

Secretary Pollack will also be acting Administrator until the confirmation by the United States Senate of a permanent Highway Administrator.

Tesler, currently Registrar of Motor Vehicles, has years of experience across the Department of Transportation, previously serving as Chief Operating Officer, Chief of Staff and Assistant Secretary for Procurement for MassDOT. Jamey also worked for the MBTA, Governor Jane Swift’s legal office and the Office of the State Treasurer.

“Stephanie has led MassDOT through many difficult challenges over the past six years; from the historic blizzards that exposed the problems of the MBTA, through saving the GLX project, instituting a data-driven Capital Improvement Plan, and guiding the RMV through a crisis last summer,” said Governor Charlie Baker. “She has provided MassDOT with stability and leadership through the last six years, serving longer than her three predecessors combined. She has allowed the agency to focus on long term efforts developing the FMCB and upgrading the MBTA’s infrastructure, service and customer relations and much more. We are so grateful for Stephanie’s service to the Commonwealth and congratulate her on her new appointment. I am confident that Jamey will step into this important role ready to lead on day one.”

“Stephanie has worked so hard for the communities of Massachusetts – the successes of the small bridge, complete streets, and more recent Shared Streets and Spaces program show the commitment to local infrastructure that has been a hallmark of MassDOT during her tenure,” said Lt. Governor Karyn Polito. “Jamey has the right experience to continue that important work, and we are thankful he has volunteered, yet again, to help.”

“It has been a privilege to lead MassDOT’s exceptional team these last six years and to work with the MBTA’s senior leadership and the Fiscal and Management Control Board,” said Stephanie Pollack. “The Governor and Lt. Governor have my deepest gratitude for entrusting me with the stewardship of MassDOT and their leadership as transportation champions. Massachusetts has become a leader in delivering a transportation system that puts people first and provides them with safer and better choices for walking, biking, using transit, or driving and I am confident that Jamey will be able to continue that good work.”

“I am honored by the trust the Governor and Lt. Governor are placing in me,” said incoming Secretary Jamey Tesler. “Working with Secretary Pollack for most of the last five years has been a master class in transportation policy, and I am happy to be able to use that knowledge to continuing advancing the programs and policies we have been working on together for so long.” 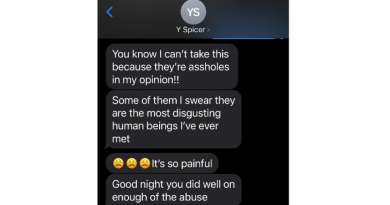 After Spicer’s Texts, Can The City Council & Framingham Mayor Still Work Together for the People?