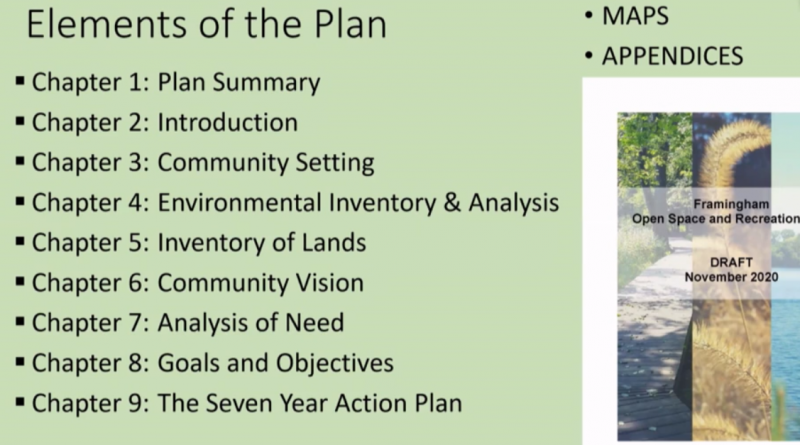 Jerram said the open space draft plan is now complete and up for review and public feedback before being submitted to the state.

The deadline for feedback to the City of Framingham is Nov. 30. To provide feedback email OSRP2020@framinghamma.gov

The open space and recreation plan is the city’s guide “for protecting, managing, improving, and expanding Framingham’s open space and recreation resources in the face of continuing development pressures” Jerram presented. It also makes the city available to apply for state grants and funding. The plan has 9 chapters that include community setting, environmental inventory and analysis, inventory of lands, community vision, analysis of need, goals and objectives, and seven-year action plan.

The plan also sets new goals and objectives, while continuing sentiments form the 2013 plan, Jerram said “there’s a lot of intersection between the way we think about the new goals and the previous goals.”

The 2020 goals are split into two main goals A: Access and Inclusion and B: Maintenance and Sustainability.

Goal A supports transportation and connectivity, neighborhood character, income, age and physical ability, racial linguistic and cultural diversity. Jerram said the goal “ensures that the open space and recreation facilities are accessible to all that wish to use them and responsive to the diverse needs of all Framingham residents.”

Some highlights from the 2020 OSRP actions include

“This is an incredible impressive document,” said Councilor Stefanini. “The maps are extraordinary.”

Stefanini suggested that each of the City’s four legislators adopt a project to try to secure the funding for a different project.

The District 8 Councilor wants the acquisition of Parcel C at Cushing Memorial Park to be a high priority. He said it is important for the City to purchase it before it gets developed.

Stefanini suggested the City take up the late Rep. Chris Walsh’s idea to develop a walking path from Cushing memorial park and Farm Pond to downtown Framingham, including the CSX area.

“That requires a lot of vision and a lot of planning,” said Councilor Stefanini, who added it would be a great project to work with Senate President Karen Spilka on. The District 8 Councilor said former Planning Board member Lew Colten has some initial plans on that.

Stefanini said the agriculture piece of the open space & recreation plans is “spectacular.” Stefanini said as someone who repr4esents an urban area he would like to see more ‘community farms.

“The most important thing to be is the aqueducts,” said Grove.

“We do have an equity issue” in the City, Dunne added.

Dunne discussed how great the Cochituate Rail Trail is in the City, and said there are connections in South Framingham that need to be done.

Dunne said the City should have a goal for more “quiet spaces.”

Dunne said some of the city’s conservation lands are “best kept secrets.”

Grove & Dunne said the City needs to do more with signage.

“The CPA (Community Preservation Act) is not going to fix everything,” said Dunne, who was part of a group who helped pushed for the vote on November 3.

Finally, Councilor Stefanini discussed MCI Framingham, and its 400-acres, and said the City should get involved in the master plan for that site as the State considers decommissioning the facility in the near future.

District 2 resident Ron Chick said it was very disappointing to lose the property at 375 Central Street, that was sold at auction. Chick said that “would have been a great park, right on the river.”

Chick said “it was a big lost opportunity” by the City of Framingham. “And we need to make sure that does not happen again.”

Chick said he would like to see a trail system around farm Pond in South Framingham, which is in Districts 6 & 7.

Maureen Dunne said District 4 has just 1.68 acres of parks in the entire district.

“We are rock bottom in this community,” said Maureen Dunne of District 4 in regards to open space and recreation.

Dunne said the City needs to have a method to inform City Councilors and residents when vacant land is up for sale, via tax order, in their district.

“Saving these assets for future use,” is important, said Maureen Dunne. “Once they are gone, they are gone forever.”

“Every piece of vacant property is a jewel, said Maureen Dunne, as it could be “turned into an asset in the community.”

Maureen & Pat Dunne want the City of Framingham to have a goal that people can walk to open space or recreation in 10 minutes within their district.

During the public hearing Karen Margolis suggested the City of Framingham create “exercise trails” or “playgrounds for adults.”

She said it would be great to have an outdoor exercise facility near the Callahan Center.

Joe Trainor, a Framingham youth football coach, said he would like the City of Framingham to consider “indoor sports facilities” for bad weather and winter months.

TIMELINE For the OSRP

The 2020 Open Space update started in March 2019, explained Jerram, who ran the meeting.

It has been a huge effort from the Parks and Recreation staff and Conservation staff, she told those in attendance on the virtual public hearing call.

In Spring 2019, the City incorporated public participation with a citizen questionnaire and public visioning workshop.

On Monday November 9th, the draft plan was released for review by the City of Framingham.

In Winter 2020, the City aims to gain state approval of the draft OSRP.

By Summer 2021, the final open space & recreation plan should be released, depending on the state response.

At the public hearing, Jerram also highlighted Framingham’s successes in completing all of the goals from the 2013 OSRP.

These successes include the Cochituate rail trail (2014), the protection of the Sudbury River oxbow (2014), children’s grove playground (2015) at Cushing Memorial Park, skate park (2018) at farm Pond, upgrades to numerous facilities, transfer of development right zoning (2015), and treatment for water chestnuts in the Sudbury River.

To view the draft – https://www.framinghamma.gov/DocumentCenter/View/40373/Framingham-2020-Open-Space-and-Recreation-Plan-NOV2020-DRAFT

Sydni Williams is a SOURCE intern and a student at St. Mark’s in Southborough. 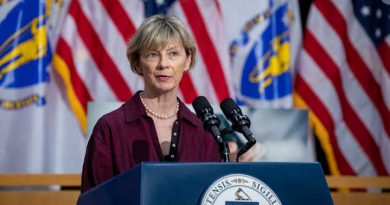 Mass Health Secretary: ‘Wear A Mask At Home’ If Family Member Has Underlying Condition or At High-Risk For COVID-19