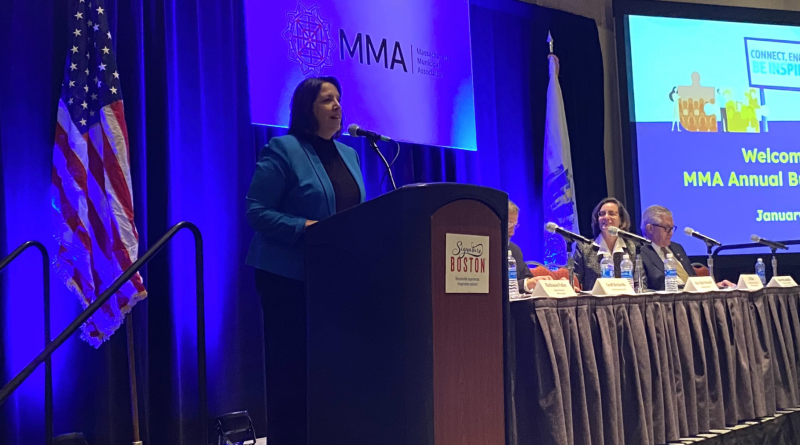 In full transparency, the following is a press release from the Governor’s office submitted to SOURCE media.(photo courtesy of MMA)

BOSTON — In remarks before the Massachusetts Municipal Association’s Annual Business Meeting, Lieutenant Governor Kimberley Driscoll announced that the application is now available for the Fiscal Year 2024 (FY24) Community One Stop for Growth. This is a single application portal that all municipalities can access to be considered for multiple economic development grant programs simultaneously.

Applications may be submitted for consideration between May 1 – June 2, 2023.

The opening of applications comes days after Governor Maura Healey filed a $987 million Immediate Needs Bond Bill to support economic development programs that are part of the One Stop, including the MassWorks Infrastructure Program, Rural and Small Town Development Fund, the Underutilized Properties Program, and the Community Planning Grant Program.

“As MMA members, you know the Community One Stop for Growth is the central way for municipalities and other organizations to access state funding programs for their economic development projects,” said Lieutenant Governor Driscoll in her remarks. “It was important for us to ensure that you have full access to the state’s grant programs, even if you have limited staff resources. We look forward to seeing all of your great economic development projects.”

“Our administration is committed to providing communities across Massachusetts with the resources they need to spur growth, create housing and strengthen their local economies, which is why we filed an Immediate Needs Bond Bill to avoid interruptions to key economic development programs,” said Governor Maura T. Healey. “That legislation will allow the Commonwealth to continue to fund community-driven projects and proposals through programs like MassWorks that are part of the One Stop program. We are glad to make the application for the One Stop available now, so communities can begin this important planning work.”

Launched in January 2021, the Community One Stop for Growth is a streamlined application process that makes it easier for communities and entities to access a suite of economic development programs funded by the Commonwealth. In its first two rounds, the One Stop resulted in grant awards for 532 projects across 205 communities. These awards amounted to over $231.8 million in community and economic development grant funds – including over $77.6 million to Gateway Cities and $60.9 million to rural and small towns.

“The opening of the application for the One Stop for Growth represents our administration’s latest step in supporting economic development in all 351 cities and towns across the Commonwealth,” said Massachusetts Housing and Economic Development Secretary Yvonne Hao. “We look forward to seeing the exciting proposals from communities and working with them to make these plans a reality.”

“Over the past several years, the One Stop has allowed the Commonwealth to support hundreds of millions of dollars in economic development efforts for communities in all regions of the Commonwealth,” said Massachusetts Undersecretary for Community Development Ashley Stolba. “By giving municipalities and other entities a single, streamlined application to access these programs, we can work more efficiently with them to create economic growth, new housing and revitalized downtowns across Massachusetts.”

The One Stop Full Application is a web-based application form designed for the preparation and submission of comprehensive project proposals that are focused on economic growth and are seeking funding support. The process allows for the projects to be reviewed and considered by multiple grant programs through a single application.

Applicants complete certain sections of the application based on where their project falls within the community development lifecycle, on a scale referred to as the Development Continuum. Funding is available for projects that will help prepare communities for growth, such as the creation of a master plan or housing production plan, the work of building up a local coalition, and/or cleaning up brownfields sites. Grants are also available for projects that are further along, and ready to catalyze development, such as renovations to blighted properties, public infrastructure improvements, etc.

As a reminder, prospective applicants can submit an Expression of Interest (EOI), which is a short form describing the project idea(s), to get feedback and guidance from the One Stop team prior to completing the Full Application. EOIs are being accepted now through March 17, 2023, and are reviewed on a rolling basis.

In addition, a series of webinars have been scheduled:

For more information on the One Stop and the Full Application, please visit www.mass.gov/onestop.

President Orders Flags At Half Staff Through Sunset on January 26 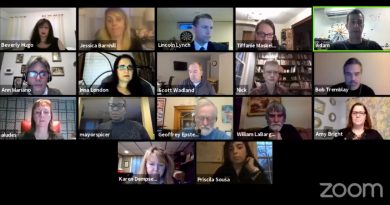