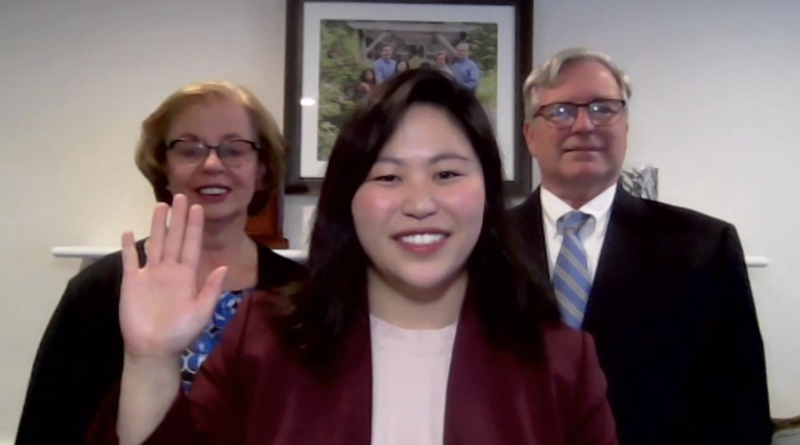 WASHINGTON DC – In a virtual ceremony, Maria Robinson of Framingham was sworn in by U.S. Secretary of Energy Jennifer Mulhern Granholm as the first-ever U.S. Energy Director of Grid Deployment today, July 28.

The Grid Deployment Office’s mission is to execute The U.S. Department of Energy’s Building a Better Grid initiative to modernize and upgrade the nation’s electric transmission lines and deploy cheaper, cleaner electricity across the country.

Robinson, the first-Korean-American elected to the Massachusetts House of Representatives recently resigned as state representative for the 6th Middlesex District which represented the City of Framingham.

“It has been an honor of a lifetime to represent the people of Framingham. Whether it was scoring funding for the removal of water chestnuts in the Sudbury River –a hot topic on the campaign in 2018, nearly a lifetime ago — or passing language to better study payment in lieu of taxes — a topic I knew little about before running for office that I will continue to dedicate my energy towards — I am proud of the work I was able to do on Beacon Hill. Beyond that, however, I am most grateful for the partnerships I made here in Framingham with our strong leaders both in and outside of government,” Robinson wrote in a letter to the community and published on SOURCE.

While a state representative, Robinson led the bicameral Clean Energy Caucus; was the Massachusetts state lead for the National Caucus of Environmental Legislators, where she also served on the board; and was the only state legislator on the U.S. Environmental Protection Agency Clean Air Act Advisory Committee.

She also served on the faculty at Tufts University’s School of Urban Planning and Environmental Policy, bringing her expertise in energy policy to graduate students.

Prior to her election in 2018, Robinson led Advanced Energy Economy’s (AEE) Wholesale Markets Program, including engagement with the Federal Energy Regulatory Commission and the regional transmission organizations.

Previously, she focused on regulatory issues relating to energy and air, including a 27-state campaign with governors’ offices, legislatures, and energy and environmental regulators. She also managed AEE’s report development and data-driven analysis at both the state and national level. She worked for Navigant Consulting in the renewable energy practice, supporting the Commonwealth of Massachusetts in analyzing and procuring contractors for statewide renewable energy and energy efficiency projects.

She holds an S.B. in chemical engineering from the Massachusetts Institute of Technology and a Master of Jurisprudence in energy law from the University of Tulsa.