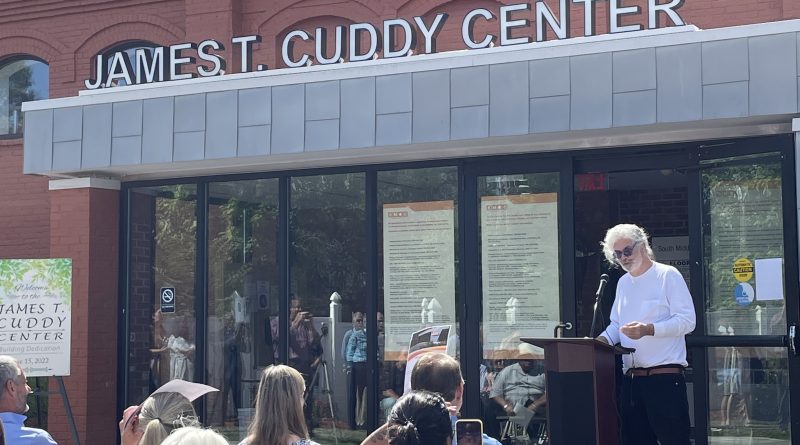 The new signage was unveiled last week during a dedication ceremony attended by Cuddy, who retired one year ago. He was accompanied by his wife, Sheila, and adult children, Cyrus, Eavan, Josh and Nora, before a gathering of friends, advocates, former and current employees and board members. A brief speaking program preceded the unveiling.

Former SMOC board chair Bruce Hulme recalled the day 37 years ago when he and former board member and longtime SMOC senior director Jerry Desilets interviewed job candidate Cuddy in the former headquarters on Concord Street on the floor above the former Mansfield Hair Academy. While the interview didn’t start well, he said that eventually Cuddy “won us over” with the vision he
described for the young organization.

“Jim is most proud to have provided a safety net for the most vulnerable people and for helping thousands and thousands find a pathway. Today he is considered a pioneer in social services, especially homelessness,” Hulme said. “Through his vision, SMOC now owns 150 buildings and 1,700 units of housing and other buildings, including the former Suburban Athletic complex which is now Framingham Community and Cultural Center.”

SMOC’s current board chair, Larry Scult, noted that years ago, SMOC named one of its childcare centers the Davitt Center in honor of Margaret Davitt, a devoted and longtime SMOC employee who Cuddy considered to be his ‘guiding spirit.’ “And so it is fitting,” he added,“ that today we are naming this entire
building in honor of Jim’s dedication to this organization.

“When Jim joined SMOC 36 years ago, we had about $10-$15 million in annual revenue. Now we are doing about 10 times that amount,” Scult said. “In the 36 years of Jim’s leadership, we have grown tremendously with the depth and breadth of our programming and with bricks and mortar.”

Recalling his long tenure at SMOC, Cuddy said, “Together, we created strategies and implemented services by adhering to the true spirit of a community action agency. We were able to build communities while addressing the issues of poverty, inequality and disability.

“When I retired from SMOC on June 30th of last year, I knew in my heart that I was leaving an organization where I’d done everything possible to ensure that the leadership transition would be smooth and successful. A year later, the proof, as my mom would say, is in the pudding,” he added. Cuddy remained at the organization through a three-month transition period after Susan Gentili, a
longtime SMOC employee and former chief programming officer for the organization, was named his successor.

While Gentili was unable to attend the ceremony that she had helped plan, her remarks were read by Scult. “Having worked alongside Jim Cuddy for many years, observing how a great leader inspires others to harness their own experiences and passion into action, I can see clearly why this organization has
flourished,” according to Gentili. “Jim was often going in 10 different directions at once, and we all admit that at times it was a challenge to keep up, yet we quickly learned that nothing was going to get in the way of fulfilling our shared mission to help people in need and to work to improve the lives of others.”

“I am thrilled to have Jim’s name placed here at our headquarters, this place where Jim Cuddy shared with all of us his passions, his ideas, his insights, and his generous and caring heart.”

Former SMOC legal counsel, James Hanrahan, mentioned how fitting it is that SMOC now occupies the former Dennison complex, which years ago existed as a local company that employed hundreds of Framingham residents and provided an array of benefits and services to employees and their families. “Jim’s vision of a social services agency is similar – that it should be everything for the people it
serves. Jim’s entire career was about ‘how do we put all those needs and services under one umbrella?” Hanrahan said. “Jim also brought artwork and sculpture and gardens to this building because he knew that to bring dignified services to people, you needed a dignified place to provide those services.”

Cuddy recalled a few of his more memorable personal achievements during his tenure at SMOC, including remembering the names of each of SMOC’s 600 staff members, recruiting a management team that was as hard working, mission dedicated and humor embracing as he tried to be, understanding that sometimes people need more than a second chance, recognizing that caring about others is
a human, non partisan value, and understanding the importance of art in the process of helping others.

“I spent half of my life and nearly three quarters of my professional career leading SMOC. In retrospect, I have embraced every moment of that experience,” he concluded.

As Dr. J. Anthony Lloyd, pastor of Greater Framingham Community Church noted in his closing remarks, “Everyone who has met and knows Jim Cuddy will now walk into this entrance at 7 Bishop St. with a smile on their face.” 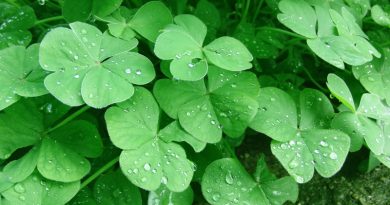 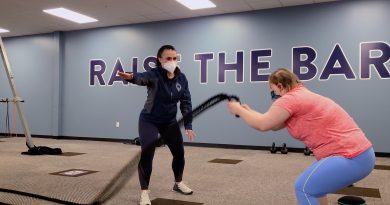 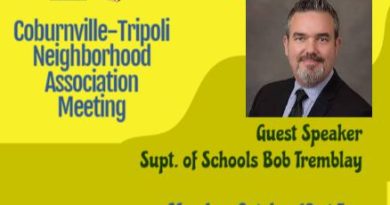