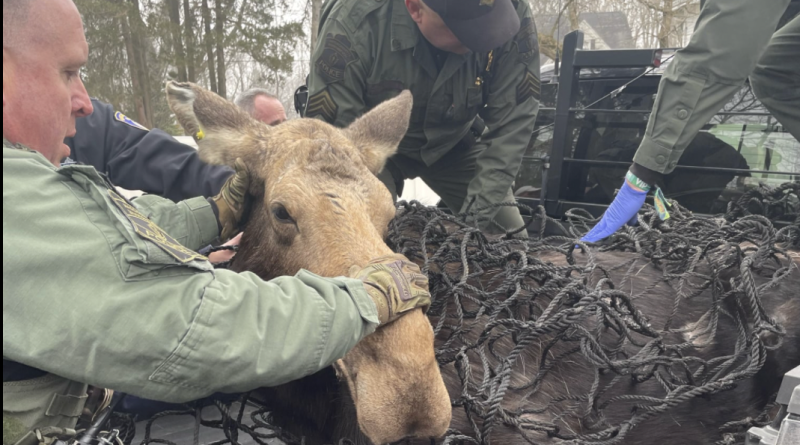 “It’s not every day that we see a moose running around town…. This gentle giant was spotted near Shawmut Ave earlier this morning, obviously lost. Officers quickly set up a perimeter around the moose and called the Massachusetts Environmental Police to assist,” posted Marlborough Police on social media.

“Because the moose was in a very densely populated area with a risk of the moose causing a vehicle collision or other public safety situation, state officials determined the best option was to immobilize the animal and move it to more suitable habitat,” said a spokesperson for the agency.

“Using chemical immobilizing drugs, the team safely darted the moose, placed identification tags on its ears, loaded it into truck and transported it to northern Worcester County in more suitable habitat,” said the spokesperson from Massachusetts Division of Fisheries & Wildlife

“A MassWildlife biologist stayed with the moose and observed it safely stand and walk away on its own.  MassWildlife determined this was a six-year-old cow (female) moose weighing an estimated 600 pounds,” said the state agency spokesperson.

“After the moose is darted and is down, its eyes are blindfolded to help keep the animal calm and to protect the eyes from injury, dust, and grime. Capture is stressful to any wild animal, so the moose is carefully monitored during the entire procedure-from darting to relocation. After immobilization the animal is ear-tagged and loaded into a MassWildlife truck (sometimes escorted by the Environmental Police) and taken to more suitable habitat. MassWildlife staff or EPOs stay with the animal to be sure it recovers from the drugs safely,” explained the state agency spokesperson.

MassWildlife and the MEP thanks Marlborough officials for the assistance they provided.

“Everyone is safe, including the moose,” post Marlborough Police on social media.

“Biologists believe this cow moose was wandering through the area looking for new sources of browse (twigs and buds) to feed on during the winter thaw. Suburban areas are planted with an abundance of soft ornamental shrubs and trees which are rich in calories. These calories are much needed by breeding cow moose during a time when foods in more natural settings are not as available or abundant,” said Massachusetts Division of Fisheries & Wildlife spokesperson Marion Larson.

Moose, like deer, lack upper incisors; they strip off browse (twigs and other plants) and bark rather than snipping it neatly. Moose eat large amounts of leaves, twigs, and buds, as well as sodium-rich aquatic vegetation in the summer. Willows, aspens, maples, oaks, fir, and viburnums are their preferred foods. A healthy adult moose can eat 40–60 pounds of browse daily. 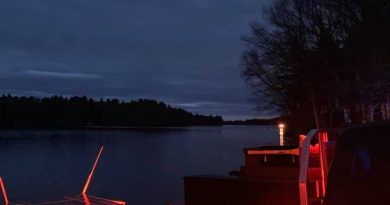 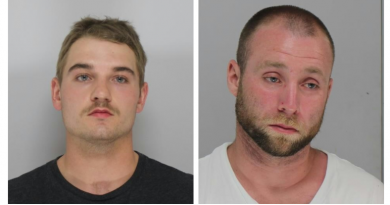