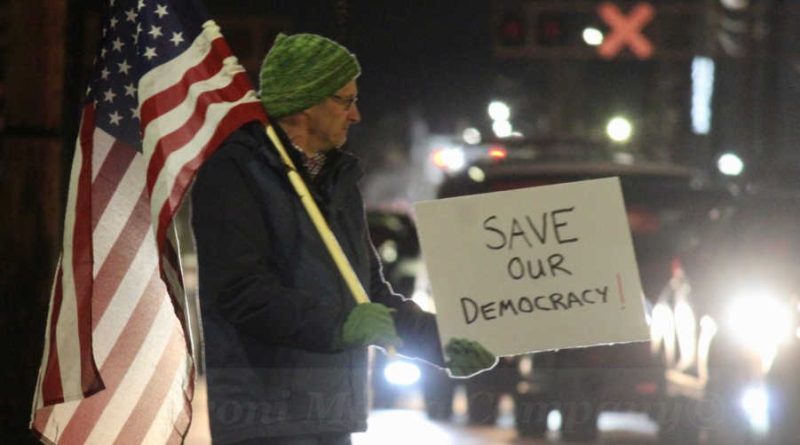 Report was updated after it was first published.

FRAMINGHAM – On Thursday night, January 6, 2022, scores of individuals held signs and flags at the corner of Route 135 and 126 in downtown Framingham as part of a vigil for Democracy.

Organized by Framingham resident Dhruba Sen, the vigil marked the 1-year anniversary of the insurrection at the Capitol in Washington DC. The League of Women Voters Framingham chapter was a sponsor.

On January 6, 2021, an angry crowd of about 2,500 former President Donald J. Trump supporters attacked the Capitol Building in Washington, D.C.

“Five people died either shortly before, during, or following the event: one was shot by Capitol Police, another died of a drug overdose, and three died of natural causes,” according to a Senate committee report.

In the Capitol that day was former Vice President Mike Pence as well as numerous members of Congress.

“We condemn the violence that took place here in the strongest possible terms. We grieve the loss of life in these hallowed halls, as well as the injuries suffered by those who defended our Capitol today. And we will always be grateful to the men and women who stayed at their posts to defend this historic place. To those who wreaked havoc in our Capitol today, you did not win. Violence never wins. Freedom wins. And this is still the people’s house,” said former Vice President Pence in 2021.

Assistant Speaker of the House Katherine Clark, who represents Framingham, was also there on January 6, 2021.

“One year ago, seditious lies about the 2020 election spurred the deadly January 6th insurrection. While the immediate physical danger of that day is over, the threats to our democracy are still present,” wrote Clark to her constituents on Thursday.

One year later, about 75-90 individuals gathered to fight for democracy and to hold a vigil to remember the events a year ago in Washington D.C. in the City of Framingham. Hundreds of events were held across the country, like the one in Framingham.

One of the speakers in Framingham was Rep. Tami Gouveia, a Democrat, who is also running for Lt. Governor of Massachusetts.

“We know exactly what happened last year. While we are gathering here, and all across the Commonwealth, and across the country, to commemorate this really dark day in America’s history, we have our Pro-Trump Republican friends who are celebrating, holding fundraisers. Even right here in our own state of Massachusetts,” said Rep. Gouveia. “So when we say there is a lot at stake, we truly, truly mean that. There is a lot at stake, right here in the Commonwealth.”

“The mob, the terrorizing mob, that busted down windows, busted through the police barricade, and was just minutes away from reaching our precious members of Congress, who had been duly elected democratically, and were in the process of certified the votes (of the presidential election), the will of the people,” said Rep. Gouveia.

One of the local speakers was Ashland Select Board member Rob Scherer, who said “this is a critical period in our history.”

The Ashland Select Board member told the crowd to “hold the media responsible. There is no such thing as hyper-partisanship. One party wants authoritarianism, and the other party is fighting to defend democracy. It is not a matter of two sides balancing out. If media hasn’t learned that lesson yet, you need to reach out to them as a consumer.”

Former Senator David Magnani spoke about getting involved to make sure the Republicans do not take over the mid-term elections in November 2022. Magnani said he is active with “Together We Elect,” and that a MetroWest chapter has been former, as well as a Massachusetts chapter.

“One year ago today, Donald Trump incited a mob of domestic terrorists to attack our Capitol and try to overturn an election. I’m thinking of the families who lost loved ones defending the Capitol, and I’m thinking about all the work we must do to secure our democracy,” Tweeted U.S. Senator Elizabeth Warren (D-Massachusetts).

“As we now reflect on these events a year later, we must understand [that] this attack on our democracy [was] larger than any one person, candidate, or election cycle… The January 6th mob was fueled not only by the ‘Big Lie,’ but the rise of authoritarian and nationalist movements that reject the basic principles of American democracy: equality, freedom, and the peaceful transfer of power,” said Sen. Ed Markey (D-Massachusetts), in a statement. “So many were willing to believe lies about the legitimacy of President Joe Biden’s victory because they had lost faith in the integrity of our democratic system. Some were even willing to engage in horrific violence because they believed elections could be stolen.”

“But we have a chance – right now on the Senate floor – to stand up to this anti-democratic movement and banish these discriminatory policies to the political dustbin. The Senate can and must take action to pass the John Lewis Voting Rights Advancement Act and the Freedom to Vote Act. And we must abolish the filibuster – if just for this issue – to do so,” said Massachusetts’ junior Senator. “With the John Lewis Voting Rights Advancement Act and Freedom to Vote Act, we will not only guarantee that all Americans can exercise their right to vote in free and fair elections, we can also counter the distrust and disenchantment that the insurrectionists exploited on January 6th. These reforms can restore Americans’ faith in the peaceful transfer of power and prevent another attempt at insurrection by ensuring we have a government that is truly of, by, and for the people.” 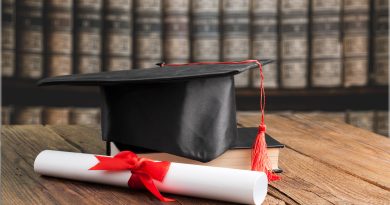 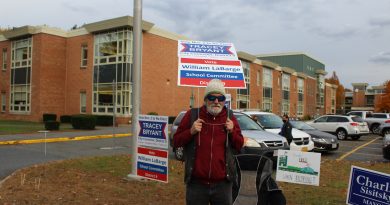