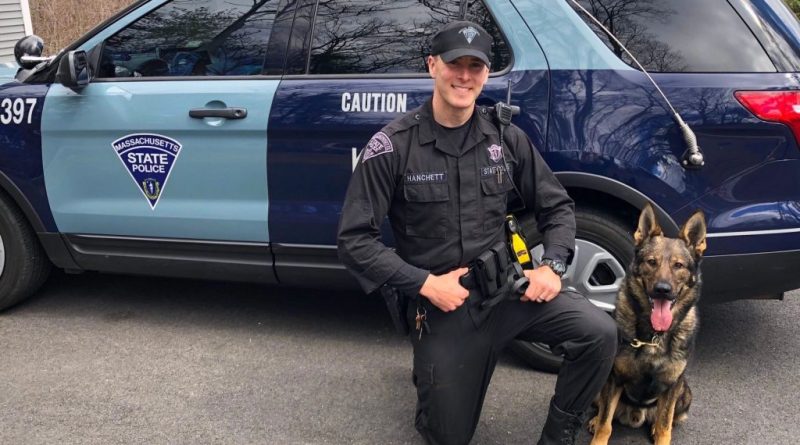 FRAMINGHAM – At 11:27 a.m. today, October 26, an emotionally troubled young adult woman being transported by EMS was able to escape from the ambulance on the ramp from Route 9 to Route 495. The young woman ran up onto Route 495 southbound in Westborough. She was observed by passing drivers running across the median and jumping down to Route 9 westbound below and continuing to flee.

Massachusetts State Police Troop C patrols and an MSP K9 Unit team, along with local police and a local police K9 team, began searching areas around Routes 495 and 9, including wooded areas along the highways.

During the search MSP K9 Unit Trooper Ken Hanchett and his partner Orry (pictured) began attempting to acquire a track from the location of the ambulance on the ramp. The two had been searching in the wood line along Route 495 for several minutes when Orry showed a change in behavior and pulled toward the highway, wanting to cross it.

Troopers momentarily stopped traffic as the K9 team crossed the highway and reacquired the track on the other side. Shortly after noon, Orry pulled down an embankment into the woods and Trooper Hanchett found the young woman. She had inflicted life-threatening lacerations to herself in the time since she had fled from the ambulance, apparently with pieces of glass from a broken bottle she found in the woods.

Trooper Hanchett tied up Orry and began rendering medial aid while also notifying Troop C Headquarters to put a push on EMS. He directed the ambulance to their location and with assistance from backup officers brought the young woman out of the woods to meet the EMS crew.

The ambulance crew, with an MSP escort, transported the young woman, who was conscious but had serious injuries, to UMass Medical Center in Worcester.

She is expected to survive. 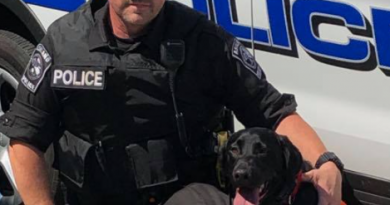 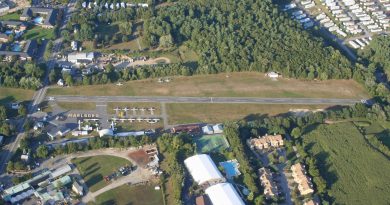 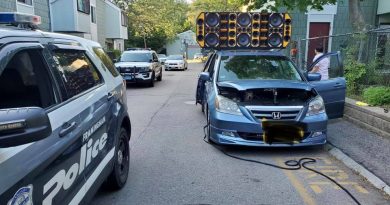 Photo of the Day: ‘Let’s Get Loud’ Not! Says Police