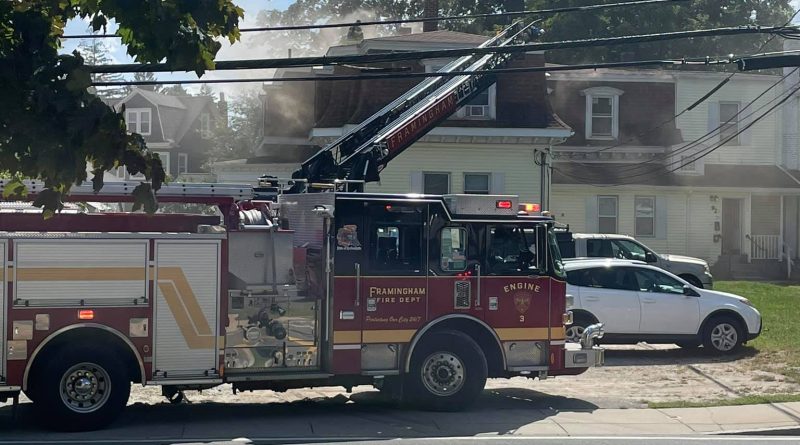 FRAMINGHAM – Thirteen individuals, including five children, were displaced in a 2-alarm fire in Framingham today, September 8.

Engine 3, Engine 1, Ladder 3, Rescue 1 and car 2 responded initially to the scene and found “heavy smoke and heavy fire from the rear of the structure on the second floor,” said Chief Dutcher.

A second alarm was called around 1 p.m.

Due to the “hard work and aggressive attack of firefighters, the fire was extinguished in about 25 minutes,” said Chief Dutcher. Firefighters were still on site however at 4 p.m.

The fire was in a 7-unit multi-family structure in the Coburnville neighborhood of the City, just south of Route 135.

“Thirteen individuals were displaced,” said Chief Dutcher. “Eight adults and 5 children. We are working with the (American) Red Cross.”

There were no injuries to civilians or firefighters, said the Chief/.

The property is not habitable due to fire, water, and smoke damage.

American Red Cross is working to find a place for all to stay.

The fire is still under investigation, said Chief Dutcher.

Cause is unknown at this time, he said.