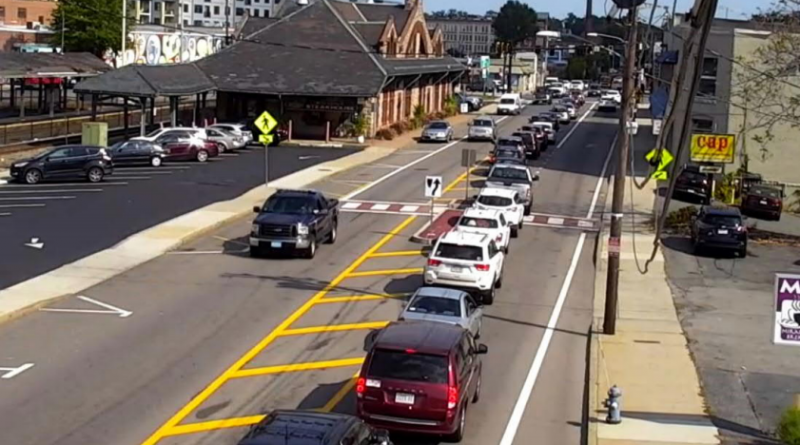 FRAMINGHAM – In a split vote, the Framingham Traffic Commission voted to keep an island on Route 135 in downtown Framingham last week.

Commission Mario Alvarez had proposed changes to the median island and crosswalk near the MBTA Commuter Rail station, but the vote to make changes failed 4-2.

Traffic consultant BETA was asked to evaluate and study the “impact to traffic operations resulting from the potential removal/relocation of the existing mid-block crosswalk (study crosswalk) and median island along Waverly Street (Route 135) located approximately 450 feet west of Concord Street. The crosswalk is adjacent to 470 Waverly Street and connects to the parking lot at Hollis Court.”

The crosswalk was installed in 2014.

Justin Curewitz and Bill McGrath from BETA presented two options to the Framingham Traffic Commission regarding the crosswalk on Waverley Street (Route 135).

BETA, an engineering, planning, and construction firm, is working with the Commission to improve conditions in the city for both drivers and pedestrians. BETA used videos provided by the City as well as visual observations, during their presentation Monday night, August 24.

The crosswalk is problematic because its median island blocks drivers who want to continue down the eastbound lane when the left turn lane is filled up. This creates a traffic problem that is exacerbated by the trains that stop the traffic from turning left.

Additionally, according to the data collected by BETA, 40 to 60 percent of pedestrians are not using the crosswalk but instead crossing the street near it.

The Commission reached out to neighbors and stakeholders that may be affected by these proposals, including the owners of the Brazilian steakhouse downtown. The restaurant owners were against removing the existing crosswalk.

Nearly all pedestrians who cross Waverly Street to enter stores (Barber shop/liquor store, etc.)
from the sidewalk or parking lot on north side of Waverly Street do not use crosswalk, wrote BETA in its report to the Commission.

Expected pedestrian activity could be impacted due to COVID-19 with reduced train capacity
and frequency at the Commuter Rail Station, wrote BETA in its report.

Vehicles generally stop for pedestrians at the crosswalk, while pedestrians not using crosswalk
will typically cross during gaps in traffic, said the BETA report.

During the morning and afternoon peak periods, when train crossing occurs, left turn queues of 12-14 vehicles, extend past the crosswalk and into the eastbound through lane, wrote BETA.

BETA said in the morning during peak hours about 200 cars want to take that left and are waiting in the queue.

“So there are a considerable number of vehicles trying to get through that lane,” said Commissioner Steve Croci during the discussion.

Alvarez said every time he goes through this intersection he is one of those vehicles in the queue, blocking the road for another vehicle to go straight, and he is a big proponent of fixing the problem.

Queues often takes multiple cycles to clear from the crosswalk after train crossing, noted BETA in its report.

Frequent train arrivals during the peak hours limit the opportunity for the left turn queues to
clear between trains, said BETA

During off-peak hours, queues were generally observed to be contained within the available
storage of the left turn lane, but occasional queues extend past crosswalk, wrote BETA in its report.

Some eastbound vehicles were observed attempting to bypass the queue by driving partially on sidewalk, noted BETA

Generally, when the left turn queue was observed to extend past the crosswalk, no vehicles
were observed in the through lane, wrote BETA

Queues generally last longer in the afternoon peak as traffic volumes are greater, wrote BETA in its report.

The first one is to relocate the crosswalk further down from the intersection, allowing the expansion of the left turn lane. This option would cost $69,000 and will have minimal traffic improvements and is not recommended.

The second option consists of eliminating this crosswalk entirely. This option would cost $47,000. This option will reduce delays and the frequency of the left turn lane blocking the eastbound lane. Pedestrians are likely to continue crossing outside of marked crosswalks or walk the longer distances needed to reach the remaining eastern and western crosswalks.

“A comparison of Level of Service, delays, queuing, travel times and traffic operations was completed to determine the added benefits that removal/relocation of the study crosswalk would provide. After a review of the comparisons, it does not appear that relocation of the crosswalk will provide a significant improvement to traffic operations along Waverly Street eastbound, with delays and queues only experiencing minor reductions,” wrote BETA in its report to the Traffic Commission.

“Travel times for Waverly Street eastbound improve by approximately one minute during the afternoon peak hour; however, during the morning peak hour, these same travels times are relatively unchanged. Conversely, westbound travel times saw minor increases in both peak hours with the two crosswalk options,” wrote BETA. “Removal of the crosswalk provides some additional reduction in delay and queuing particularly in the afternoon peak hour. However, these reductions are not sufficient to improve overall LOS. Despite the currents impacts to traffic operations observed during the Existing peak hours, traffic operations under relocation/removal of the study crosswalk will not provide a significant improvement over the Existing conditions. Additionally, while both the relocation and removal options relocate crossing pedestrians to other crosswalks, field observations indicate that some pedestrians at present cross outside of the crosswalk using gaps in traffic. Pedestrian counts show moderate pedestrian volumes using the existing mid-block crossing. Based on field observations and the moderate demand, the potential exists for additional pedestrians to cross at the existing crossing location even following its relocation or removal. This may degrade overall safety for pedestrians in the area.”

Framingham resident Magda Janus, who is a candidate for City Council is District 7, suggested the removal of 4 existing parking lots on the left side of the street to allow for a third lane.

“This will cost pennies in comparison and still keep the crosswalk where it is,” she said.

The BETAevaluation results in the following summary of findings:

“Based on the findings, the option of relocating the crosswalk to the west provides minimal benefit while potentially negatively impacting pedestrian safety. This option is not recommended While removing the existing crosswalk provides some additional benefit to delay, queuing and periodic blocking of the EB through lane, it is likely to promote an increase in pedestrian crossings outside the marked crosswalks as the desire lines for pedestrians will not change. This potentially decreases overall pedestrian safety,” concluded BETA in its report to the Framingham Traffic Commission.

Alvarez wanted to know with BETA considered removing the island, keeping the crosswalk, but making it more visual for drivers.

“The island is what is not allowing these vehicles to move slightly to the left,” said Commissioner Alvarez.

There was not an option for removing the median island and keeping the crosswalk,” said BETA to Alvarez. “as part of this study.”

BETA said the median island gives pedestrians “a little bit of a refuge area” when they have made it across halfway. He said it is a safety measure.

BETA said a flashing light near a crosswalk does not give a pedestrian the same “protection” as the median island does.

Voting in favor was Alvarez, and Commissioner Lincoln Lynch IV.

Commissioners Sedewitz, Croci, and Wareham all said they had safety concerns still.

Report by SOURCE summer intern Lucas Gustafson, who is a Framingham High student.

Walk Up-Test Site at St. Tarcisius To Close Friday; Give Away Home COVID Tests Instead