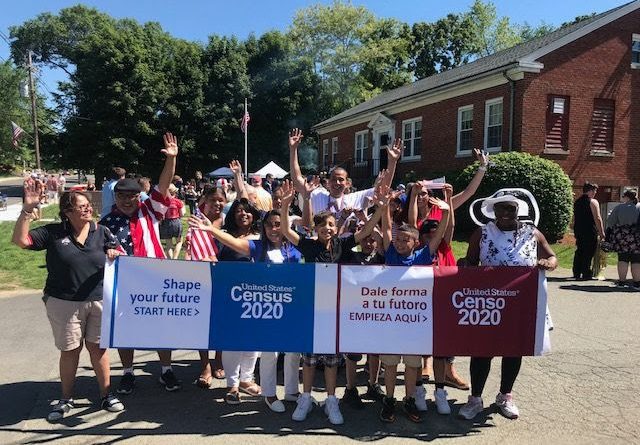 FRAMINGHAM – Almost all of the top 20 cities in the Commonwealth of Massachusetts exceeded the U.S. Census Bureau’s 2019 population estimates, when the 2020 census numbers were released this week.

That undercount could mean the loss of millions upon millions of dollars for both Framingham and Boston.

The U.S. Census Bureau every 10 years counts every individual in a community. That count took place in 2020. The numbers were just released.

The City of Boston was forecasted to be undercounted, but Framingham Mayor Yvonne Spicer formed a 23-member Complete Counts Committee in 2019, that had a plan, and action items, to make sure that every resident in the City participated in the 2020 census. The 23-member Complete Counts Committee was chaired by Spicer, with assistance from Citizens Participation Officer Alaa Abusalah.

Spicer in her 2020 State of the City address identified a complete census count as one of her top 7 goals.

Specifically she said wanted to “advocate for the census to ensure Framingham has adequate federal funding to support our services.”

Mayors across the Commonwealth knew the significance of having a “complete count” for the census in their city.

As the federal government will use the 2020 census figures to distribute more than $1.5 trillion dollars over the next decade. Those funds include community development block grants, Title 1 education grants, Medicare funds, highway funding, workforce grants, etc.

With the potential undercount of possibly 2,000 individuals or more, that could means millions of dollars lost for the City of Framingham, which taxpayers will need to make up.

“According to the National Conference of State Legislatures, Massachusetts receives a little less than $3,500 for each resident each year. That means for each undercounted resident, the Commonwealth, and more specifically Framingham, will be receiving less federal funding through grants and other programs that are essential to our residents,” said State Rep. Maria Robinson.

“The 2020 Census data for our city is disappointing. With an incomplete count, our school district will feel the impacts for the next decade. Its data determines how much we receive for school programs and services such as special education grants, Title 1 grants, free and reduced lunches, and Head start programs, etc,” said School Committee Vice Chair Tiffanie Maskell.

SOURCE reached out to the Spicer administration on Thursday, and as of midnight Saturday, no response.

“It seems outside the realm of possibility that Framingham’s population shrunk between 2019 and 2020. It does seem possible, however, that people weren’t counted,” said District 5 School Committee member Priscila Sousa.

“The most important count that takes place every 10 years and our Mayor and her team failed the City of Framingham again,” said District 6 City Councilor Phil Ottaviani. “Because every person was not counted we will lose federal and state aid for the next 10 years. It is very disappointing that these lost funds now will have to be made up by the taxpayers of Framingham. These lost dollars provide better school funding and representation for our City.”

If Framingham is undercounted by 2,000 individuals, and using the $3,500 figure, that means the City of Framingham may see $7 million less per year for the next 10 years or a potential loss of $70 million.

The good news, is that it is not as dire as Boston, which may see close to a $60 million loss per year over the next decade or a $600 million loss.

Again, 80% of the top 20 largest communities in the Commonwealth met or exceeded the 2019 Census Bureau estimates.

“It will be important for Framingham to determine why the official 2020 census count
came in significantly less than US Census Bureau’s estimate in 2019. While some
deviations were expected given that the 2020 census was conducted during a
pandemic, no other city in the Commonwealth came in lower than the Census Bureau’s
estimate, even though they were also gathering information under the same set of
circumstances. An accurate census count is of vital importance to our City with possible
impacts on our congressional seats and legislative districts, planning, emergency
response, and the amount that Framingham will receive in state and federal funding for
the next decade. It is critical that we determine the accuracy of our Census numbers,” said former City Councilor Charlie Sisitsky, who is running for Mayor.

In April 2019, Spicer created the City of Framingham Complete Counts Committee. An action plan was finalized a few months later, and the committee’s goal was “to increase awareness and motivate residents to respond to the 2020 census.”

“We knew that it was problematic from the beginning. It began during a pandemic and the Trump administration tried to insert politics into the count by insisting the survey include a question of a person’s citizenship, which frightened many of our families. We needed a much more robust outreach to those families, which never seemed to fully come together,” said Maskell, who represents District 7, one of the most undercounted districts in the City.

“Even the state had to step in to provide outreach to those communities about COVID related issues. The state cannot solve all of our problems,” said Maskell, who was one of the 23-members of the Complete Counts Committee. “It was also the Mayor’s office that decided the City logo for the census was not going to be translated into other languages.”

“The bottom line is we did not do enough and now our city, our families, and our children will suffer because of an incomplete count for the next decade,” said Maskell.

The City of Framingham’s white population dropped significantly between 2010 and 2020, per the U.S. 2020 Census.

The drop in white residents is not a surprise considering that the percentage of white individuals nationwide and across the Commonwealth dropped, in part due to the new multi-racial category on the census and an significant increase in Asian and Latino populations.

But Framingham has a unique issue, when it comes to categorizing white individuals.

“The decrease in White residents points to the Brazilian community not being properly counted. Brazilians have historically identified themselves as White in many government forms and questionnaires because the government often fails to differentiate between Hispanic and Latino. Brazilians are Latino, but not Hispanic,” said Sousa. “In a form where they are forced to choose between White and Hispanic, they often opt for the former because it better describes them and their European heritage.”

District 7 City Councilor Margareth Shepard, the first Brazilian-American elected Councilor in the nation, said she wanted to see more of a breakdown in the census numbers before commenting.

But she did state she knew there were “concerns related to the ‘citizenship question’ that was not asked in the end.” She said “many immigrants did not answer the Census. I myself failed to convince many Brazilian families to answer the Census.”

One of the tasks of the 23-member Complete Counts Committee was to increase the response rates to the 2020 census, especially in Districts located South of Route 9 (Districts 6-7-8-9).

But the Census Bureau encouraged “in-person outreach to households that did not respond to initial Census mailers” to all of the major cities in Massachusetts.

The City of Framingham already knew in 2019 that District 6-7-8-9 traditionally had low response rates to previous Censuses, based on this graphic.

It is unclear and unknown what the City of Framingham did for action items to try to increase Census participation across all Districts, but specifically in Districts 6-7-8-9.

According to the Census Bureaus data, released in January 2021, only one Census tract had a percentage of 90% participation or better in the City of Framingham.

Of the 16 Census tracts in the City of Framingham, half of them had a participation rate of less than 70%, with five below 60%.

“It is very important that every resident be counted every ten years as part of the census.  While it is not yet readily apparent why Framingham appears to have been underreported, the consequences will be felt by our community for the next decade,” said State Rep. Jack Patrick Lewis.

The City of Framingham Complete Counts Committee knew it has several hard-to-count populations within its border.

Some hard-to-count populations include those with a language barrier, individuals with low literacy rates, or people who may have lacked internet access.

There were also some individuals in the City who did not wish to participate in the Census as they distrusted the government, and the President at that time Donald J. Trump.

But undercounts also happen when the homeless population is missed, too.

The Census Bureau specifically told communities to focus on young children, the highly mobile, racial and ethnic minorities, non-English speakers, those experiencing homelessness, low-income persons, and those living in multi-family housing, when it came to hard-to-count populations.

It is unknown what plans the mayor had to address these issues.

Ironically, the City of Framingham and Mayor Spicer hosted the Commonwealth of Massachusetts’ kickoff of the Census campaign in April 2019.

Framingham was chosen to host the statewide kickoff event, Secretary of State William J Galvin said, because it typifies many of the challenges cities face.

“This is my first census as the chairperson for our city and we want to make sure everyone is counted in our community. To have this kick-off in Framingham bodes very well for our city,” Mayor Spicer told the Gannett-owned daily newspaper.

In the 2020 Menino Survey of Mayors, more than 80 percent of mayors surveyed reported being either “very” or “somewhat” concerned about undercounting of their constituents.

Mayor Yvonne Spicer has never issued a press release or held a press conference to discuss her concerns about the 2020 Census or the potential for undercounting in the City of Framingham.

The Mayor did hold a Community Hour conversation on the 2020 Census and engaging in government on September 15, 2020, about 2 weeks before the then-2020 Census deadline of September 30. It was later extended to October 31. She never mentioned a fear of undercounting and the Census was only about discussed for less than 15 minutes during the 60-minute conversation.

And while the census numbers were made public this week, the Mayor and a handful of City leaders had the data early.

SOURCE has filed a FOIA for all documents related to the Complete Counts Committee including any plan, action items, and all minutes or video recordings.

“It is crucial that we gather accurate population data to make sure that funds are being properly allocated where they are needed. However if the population did decrease by 2,000 between 2019 and 2020, it only stresses the need for us to invest in our education and public spaces to help retain people in Framingham,” said Carlos Valadares, who is one of three candidates running for Mayor.

The preliminary election is Tuesday, September 14. Voters will choice between Mayor Spicer and challengers Sisitsky and Valadares. The top two move on to the November 2 ballot. The winner will be elected for a 4-year term.

No matter who wins, Framingham may be stuck with its 72,362 population count until the 2030 Census.

“It is extremely unfortunate that Framingham appears to be undercounted, as we will have to find other means of financial support for the next decade,” said Rep. Robinson.

Could Framingham Challenge the 2020 Census Number?

The U.S. Census Bureau does have a 2020 Census Count Question Resolution (CQR) program.

The purpose of the 2020 Census CQR is to provide a mechanism for governmental units to request a review of their official 2020 Census results and to help ensure that housing and population counts are correctly allocated to 2020 census tabulation blocks in the 50 states, District of Columbia and Puerto Rico.

The current schedule is as follows: