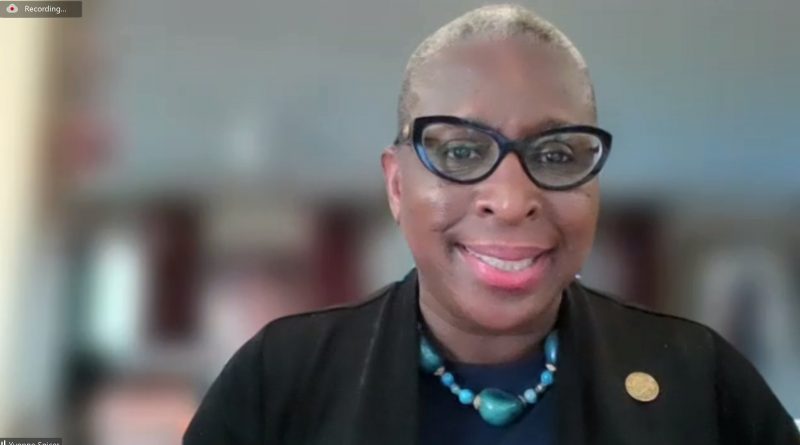 Mayor Spicer in submitting her Fiscal year 2022 budget to the Council had proposed a 2.5% tax increase, the largest allowed by law.

Spicer signed the new budget that was $1.5 million less than she wanted last week, and it went into effect on July 1.

But Mayor Spicer is not happy with the Council’s cuts.

“The goal of achieving a zero or less than zero percent levy is admirable but is not sustainable,’ said Spicer in the City of Framingam’s newsletter that was issued by her administration today, July 6.

“Some of these line-item cuts by the City Council cause me to pause as they will undermine the City’s efforts to recover,” wrote the Framingham Mayor.

“The elimination of the salary for the Economic Development Director (Planning & Community Development Director) is a mistake that will haunt Framingham for years as we recover from a pandemic. Economic development is critical to jump-starting our economy and getting our businesses up and running. The elimination of the salary for this position hampers the City’s efforts to rebuild our business community,” said Mayor Spicer in the administration’s newsletter.

“The Council’s decision to not fund an interim Chief Financial Officer position for the remainder of the year due to the retirement of Ms. Mary Ellen Kelley is also detrimental. With resources coming to our City totaling $26.9 million from ARPA funding, the need for accounting and recapping those resources is critically important as with any funding. The financial team was already running as a skeleton crew. This decision essentially further cripples this team which has been doing more with less for years. Again, this cut harms the City,” said Mayor Spicer.

Assistant Director of Finance Jen Pratt is now running the department and is interim CFO Director for the City of Framingham.

“The Council’s choice to only fund the Human Resource director position through December 2021 creates instability and challenges the City to effectively support staff who are vital to the City. Our current Director has led the way with contract negotiations, helped attract a talented workforce, and navigated personnel crises for both the City and Schools.  Cutting funding for this position undermines our effort to continue building a quality workforce and hurts the City,” said Mayor Spicer today, July 6.

“Our Health Department, which has been taxed to the limit over the last 15 months, doesn’t seem to have any relief in sight. The City Council’s decision not to approve the appointment of a new health director despite unanimous support from the Board of Health and a stellar track record and performance is shortsighted and damaging to the City and the division,” said the Framingham Mayor.

“All four of these critical roles support rebuilding and reimagining in our City. The stark reality is that each of these positions is very difficult to fill especially in current times with people reimagining their work. Each one of these positions is in very high demand in our state and across the country,” wrote the Mayor to citizens and resident who signed up for the City’s newsletter.

“As a 3 1/2-year-old City, we’ve done some things very well, and we were on a trajectory to continue doing them as they relate to hiring and retaining up a quality workforce, economic development, community health, fiscal stability, and infrastructure. I know the teams in these divisions will work extremely hard to support the goals and initiatives of their departments, however, this simply cannot be maintained,” wrote the Mayor.

Since January 2020, the City has hired a new police chief, a new fire chief, a new DPW director, a new library director, a new highway & sanitation director, a new water & wastewater sewer director. The City is currently advertising for a new health director, and a chief assessor, and the CFO just retired. And in may, the entire Veterans Department resigned, including both the Director and the Assistant Director.

“The goal of achieving a zero or less than zero percent levy is admirable but is not sustainable. Costs have consistently gone up— goods and services, fuel, trash, recycling fees, etc. Moreover, the budget cuts are forcing us to defer some maintenance and upkeep, as well. I don’t know about you, but I prefer to address problems when they are small before my hand is forced to deal with a costly emergency,: wrote the Mayor, who is seeking re-election for another 4-year term in November.

She is being challenged by former City Councilor Charlie Sisitsky, who was a Selectman for decades and a Brazilian business owner Carlos Valadares.

None of the three candidates have turned into their 500 signatures to the City Clerk. They are due July 15. The signatures must be certified for any of them to appear on the November 2 ballot.

“I greet this new fiscal year with the hope and optimism of maintaining front-facing services and focusing on our recovery and revitalization. We will persevere and I promise to keep you informed,” concluded the Mayor in the newsletter today.