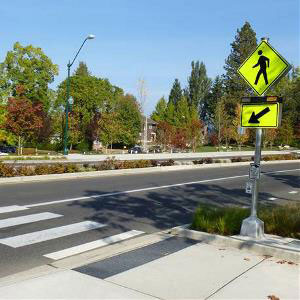 FRAMINGHAM –  A request for a crosswalk with a rectangular rapid flash beacon (RRFB) located at Maynard Road and Pleasant Street, was denied by the Framingham Traffic Commission at its virtual meeting Tuesday night, May 25.

For the Traffic Commission to add a crosswalk, the section must meet six criteria, said Commission Chair William Sedewitz.

The intersection met 5 of the 6 criteria, but crosswalk does not generate enough foot traffic for the Traffic Commission to proceed with plans for implementing a crosswalk, explained Commission Chair Sedewitz, who is also the Chief Engineer for the City of Framingham.

It fails to meet the requirement of 20 pedestrians crossing during a peak hour, said the Chair.

Exceptions could be made, though, for areas where the majority of residents are considered members of the elderly and retired community, Sedewitz said.

A letter of support from Angel Aguirre, the manager for Framingham Green Apartments, voiced how this crosswalk would be beneficial for the apartments’ residents who are primarily elderly or disabled.

As written in the email sent to the Traffic Commission, “The cross walk would allow our residents to visit nearby stores with ease and without fear of oncoming traffic.”

But Sedewitz said it wasn’t enough to allocate Traffic Commission funds toward a crosswalk at Maynard Road and Pleasant Street.

“I think it’s a stretch to say that would meet our crosswalk policy,” Sedewitz said.

The Framingham Traffic Commission’s next meeting will be in June.