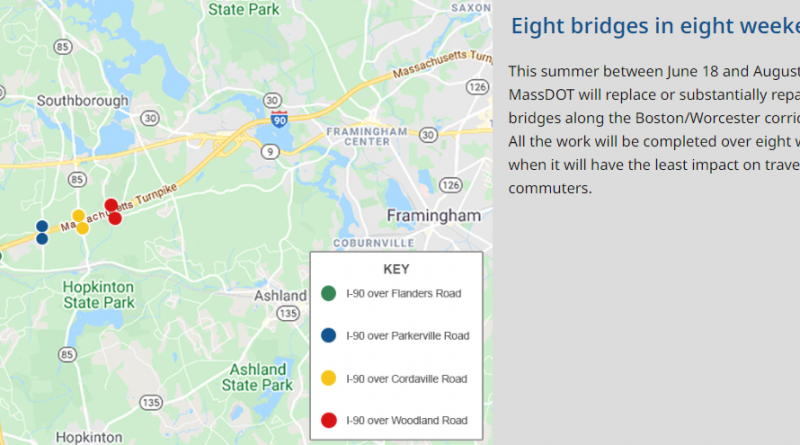 BOSTON – The Massachusetts Department of Transportation (MassDOT) is replacing 8 bridges over 8 weekends this summer on the Mass Pike.

But on the weekend of June 4, the Mass Pike from Route 9 in Framingham to Route 495 in Hopkinton will be reduced from three to two lanes in anticipation of the bridge replacement project.

The bridges are located on the Mass Pike East & West over Flanders Road in Westborough and Parkerville Road, Cordaville Road and Woodland Road in Southborough.

To minimize disruptions, MassDOT will use a rapid bridge replacement approach to replace eight bridges over eight weekends.

This approach reduces the project duration from a potential of three years with traditional construction methods to just over one year. In advance of the eight weekends, preparatory work is being performed on Mass PIke and on the local streets.

The existing abutments are being refaced at Woodland, Parkerville and Flanders Roads.

New abutments are being constructed at Cordaville Road.