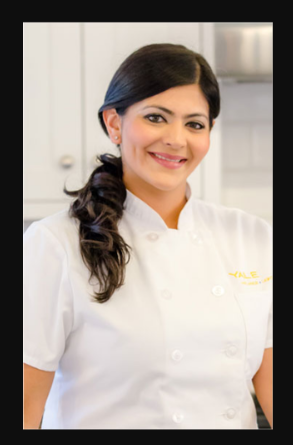 FRAMINGHAM – Chef and Culinary Educator at Yale Appliance Saba Wahid will be on Food Networks Chopped on Tuesday, May 4, 2021 at 9 p.m.

This series “Chopped: Martha Rules,” is a series that consists of five episodes that started to debut on April 13, 2021 on the Food Network channel and episodes continue to be aired as time goes on. This series was filmed outside in Kennebunkport Maine back in August and
showcases 16 chefs competing for the grand prize of $50,000.

Wahid back in August went to Maine and filmed her episode for Chopped to have it pre-recorded and she will be premiering in that fourth episode of the series on Tuesday on Food Network.

The show has four chefs compete against each other in each episode. They are handed a basket of ingredients to use for the three timed rounds: appetizer, entree, and dessert.

Martha Stewart puts her own spin on things when she gets to surprise the chefs in all kinds of ways for each episode.

The chefs are broken up into four groups to compete against each other in those first four episodes. Then each chef who won each round from those previous episodes [four chefs remain] will go onto the fifth and final round to compete to win the grand prize money.

There are three judges who will be judging Wahid and the other chefs, and those people are, Martha Stewart, Marc Murphy, and Marcus Samuelsson. The host will be Ted Allen as well.

In her household Wahid said that food was always the “main focus.”

She remembers running around the kitchen and smelling the “aromatic beautiful smells” while eating the Pakistanis foods.

Born in Brookline, Wahid later moved to Framingham and has lived here her whole life.

Growing up Wahid knew she wanted to attend culinary school due to her love for food and at the time of applying to colleges, she said her parents did not see cooking as an “acceptable” career choice.

Wahid got her bachelor’s degree in sociology with a minor in film studies at the University of Massachusetts Amherst and graduated in 2003.

She said that getting her bachelor’s degree “was kind of the foundation for my education. Once I checked that off the list then I was able to pursue a career on my own terms after that.”

After school Wahid said she moved to New York City and started working for a catering company in Manhattan called Great Performances.

“That [Great Performances] is where my real love for food and doing this professionally began,” said Wahid.

While being in New York City Wahid knew she wanted to pursue her “culinary passion” and while working at the catering company she attended the French Culinary Institute.

She said that she was not sure at first which angle to take in the culinary world because “it has always been sort of taboo” due to her parents not encouraging Wahid to become a chef.

At the French Culinary Institute Wahid said, “I did a management program to kind of help guide me a little bit and show me another side of the industry and help me kind of see what the potential was that I could do.”

Wahid added the management program at the Institute was a six-month program and worked full time after that.

Wahid said that there was a time where she lived abroad in the Middle East to pursue TV in Dubai, with Dubai channel one.

She added that she lived and worked in Dubai for four years as a Lifestyle TV host and doing weekly cooking segments.

She said that “it was fun, but it was also super stressful,” since the channel was run by the Dubai Government and it was very conservative.

Things were “taboo” to say according to Wahid, so she had to really change her style of talking and what to say when she was on the live TV show in Dubai.

Wahid said even when it was stressful, she learned a lot and met a lot of cool people there. “That was a pretty big milestone and a big career accomplishment,” Wahid added.

She said that being abroad helped her, “create more of a direction of where I wanted my culinary career to go.”

After that four year abroad experience Wahid moved back to the U.S. and started teaching recreational cooking classes at Sur La Table from 2014-2017.

Wahid said when she moved back to the US at the end of 2014 Wahid was contemplating staying in Boston or not and then she met her husband in March of 2015 and “had a reason to stay” in Boston to pursue her work and life there.

Then she said that she transitioned to Yale Appliance in 2017 and is currently working there now, married her husband in 2018, and now has a 16-month-old daughter.

“I had always tried to transition my media experience from Dubai to the US and found it was really difficult to translate that or transcribe that – it wasn’t valued I felt in the same way,” said Wahid.

She added that she was, “no stranger to casting calls,” since she was always looking and was on the search for them due to her history in the TV media field.

Wahid said that in many casting roles she tried to connect within the U.S. she found that she “never really made the cut in any shows before.”

Until about 2 years ago Wahid applied to the Food Network show “Chopped” and got very far into the interview process and then the final question was based on restaurant experience with high pressure scenarios, and due to her lack of experience in restaurants she never made it past that point in the interview.

Then Wahid said in 2020 during the early stages of the pandemic she was on maternity leave since December 2019 and was preparing to go back to work in March 2020 and due to COVID-19 she had to stay home for some more time.

“I was kind of looking forward to going back to work but didn’t have that option – but again blessing in disguise I was able to get more time with my baby and I was just at home, but – I felt like I needed a creative outlet,” said Wahid.

She added that she invested in a nice camera and started to cook at home and document everything on her Instagram.

“I was doing it on a daily basis because this was my creative outlet during the pandemic,” said Wahid.

Throughout the next couple months Wahid said she created recipes and posted videos and photographs of her cooking at home.

Once June came along Wahid said she got a direct message on Instagram from the casting company to participate in the new series of “Chopped” with Martha Stewart.

She added that at that this time she did not take it as seriously since she has applied before and never got past that interview phase due to her lack of restaurant experience.

Wahid said the casting producer kept telling her to call, and with the help of social media they “obviously seen all my posts on my Facebook, on my Instagram and my website so they knew I had relevant experience.”

Wahid was planning on returning to work and checking out day cares for her child so things were getting busy, she said.

Wahid added that once she got the application done, she had to plan interviews and after that she got an email confirming she got selected to be on “Chopped” in July.

“It obviously got me really excited,” said Wahid when she found out that this episode is going to be with Martha Stewart.

She added that when production started in August in Kennebunkport Maine, they had to have protocols with COVID-19. “They could create a COVID-19 bubble for everybody,” and made COVID-19 testing available, and checking everyone regularly.

Wahid said that it had its sad moments because she had to leave her baby, “but I knew that this was something very important that I had to participate in, and it was good for my career, good for my brand, and the opportunity to be on Food Network,” and to meet Martha Stewart, “was pretty remarkable.”

“I can say that it was like alone a career defining moment.”

There was a hotel booked out in Maine for everyone who was in the show, got COVID-19 tested at the hotel, got food sent to them, and got transportation all taken care of from the show, she said.

The competition was a five-part series, three rounds already aired, the fourth round is airing Tuesday [the one Wahid is on,] and the fifth round is the finale that would be aired later.

She added that it took a whole day to film one episode for this series.

“It has been a busy couple of weeks, but it is also great to share the experience,” said Wahid.

Someday Wahid said she wants to have her own cooking show, and to own her own restaurant.

“We hope to definitely grow our family, we have a beautiful daughter, but we would love to have two,” said Wahid.

Wahid added that she will “continue to strive for more,” by having a restaurant one day, a TV show one day, and hoping it will all be a part of her journey in the future.

Wahid said the coolest part of being on Food Network was being a part of the experience.

She said that it being a timed competition was very stressful, having 10 cameras on you, and trying to keep your cool while cooking on National TV, “but it was fun at the end of the day.”

Wahid said, she loved being a part of this production, and “having people like Martha Stewart, Marcus Samuelsson, and Marc Murphy who are culinary giants all of them in their own respect – and to have, Marcus Samuelsson, Martha Stewart, and Marc Murphy taste my food I have to say you know again – a once in a lifetime opportunity, and I was so gracious to have been included in that.”

Wahid said the most educational part of being on this show was, “to really stick to what you believe in.”

She said that it was a winner take all competition and she focused on not getting pressured by outside factors, and to not get into your own head.

“Cook for you – cook food that you believe in,” she added.

The fifth and final episode for this series of “Chopped: Martha Rules” is set to be aired on Tuesday May 11, 2021 at 9 p.m. on Food Network.

Caroline Lanni was a 2021 spring semester SOURCE intern. She is a senior at Framingham State University. This was her final assignment for SOURCE< although a couple of her assignments will post after her internship ends. 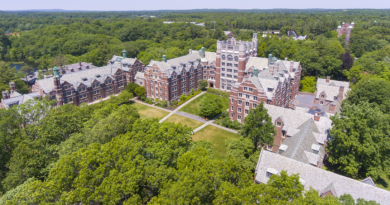