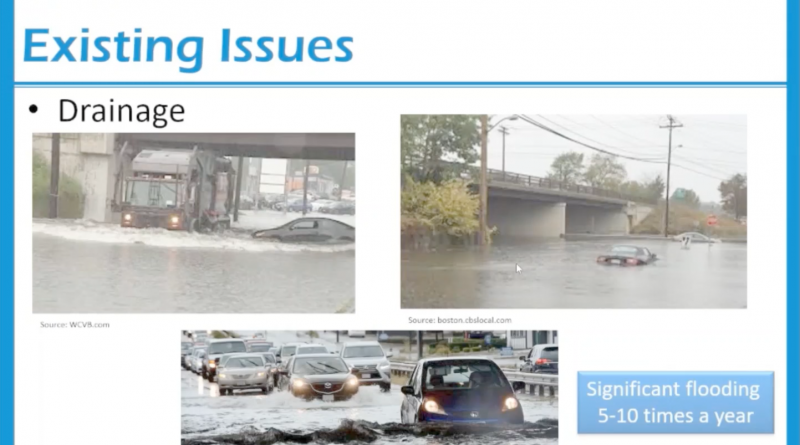 FRAMINGHAM – The Massachusetts Department of Transportation (MassDOT) posted a pre-recorded webinar on February 2 providing an overview of an improvement plan for the flooding of the intersection at Route 9 and Route 126. MassDOT has designed a fix for the flooding, with a construction timeline. The public can offer feedback through February 16.

The flooding of the intersection at Route 9 and Route 126 happens with heavy rains, and has been occurring for decades. Attesting to this is At-Large City Councilor Janet Leombruno with a personal anecdote from her childhood.

“I vividly recall whenever it rained, as my mother picked me up from nursery school at the intersection, I thought we were going to be carried away,” wrote Leombruno. “This project is so long overdue, and is greatly needed for this major junction. I am very hopeful that this project fixes the flooding problems. Thank you Sen. Spilka for your efforts in moving this project forward.”

“The Department of Public Works is looking forward to the drainage improvements on Route 9 at the Route 126 interchange,” wrote Allyssa Jewell, senior communications project manager for the City of Framingham Public Works Department to SOURCE. “Flooding at this intersection occurs frequently and is problematic to both residents and commuters. Although the new drainage installation will not make the flooding go away entirely, this project will eliminate the majority of flooding, which is a significant improvement.”

“We estimate that the total project will cost roughly about $3.2 million, which will come from both the federal and state fund,” said Pham.

The Commonwealth then discussed the creation of the roadway and how it has changed over the years, in the Feb. 2 webinar.

In order to assess what needs to be done, the Commonwealth first had to analyze several factors.

“We completed a hydrologic and hydraulic analysis to determine the contributing area to the drainage system. This was determined to be 57 acres,” said Costa. “What we found is that the existing drainage system is 24 inches in diameter… and with the urbanized covertype that is out there around route 9, the draining system had inadequate capacity to convey major storm events.”

They looked at the problem from all angles and tried to solve it accordingly.

“We looked at upsizing that to a larger diameter pipe, however, the larger diameter had the potential to create downstream flooding issues,” said Costa. “Because of that… the increase in pipe capacity was determined to be unfeasible.”

“Finally, we looked at adding additional storage in the form of stormwater infiltration basins,” said Costa.

Luna then talked about how the plan is to construct two stormwater infiltration basins, one at the island of Fairbanks Street and Beacon Street, and one at the existing salt shed.

“We are proposing to redirect the closed drainage to the vicinity of the basin,” said Luna.

With added construction comes the worry that there will also be added traffic.

“There will be no permanent traffic changes as a result of the project. There will, however, be detours and lane closures during construction,” said Luna. “All off the roadway work will occur during normal operating hours. Any lane closures on Route 9 will occur in the overnight hours between 9 p.m. and 5 a.m.. Likewise, ramp detours will also occur during the overnight hours.”

“To facilitate this flood relief project, MassDOT will be constructing a new salt depot at the rear of the Framingham Park and Ride at the Exit 12 interchange of the Mass Pike,” said Benoit. “The timing construction of this new salt shed will not affect the timeline of [the infiltration basins] project.”

In a comment outside of the webinar, Massachusetts State Rep. Maria Robinson told SOURCE by “separating out the salt shed project from the intersection project, MassDOT has been able to accelerate the timeline on this much-needed fix.”

Massachusetts State Rep. Jack Lewis said “everyone knows that this intersection has been problematic for decades, and I’m excited that a resolution is within sight. Thank you to Senate President Karen Spilka, Rep. Maria Robinson, and their staff for their partnership and the steadfast effort to get this resolved.”

There is a lot of support behind the project, but some people want even more, including Framingham District 4 City Councilor Michael P. Cannon.

“I’ve been asking the administration to work with our state legislative delegation and the state agencies to do a little better and provide a public hearing, which can be done virtually, [as long as they] allow that dialogue to happen, as those discussions can lead to a meaningful impact on the project,” said Cannon. “For something of this importance, I think that dialogue is critical.”

Written statements and other exhibits regarding the proposed undertaking are to be submitted to Patricia A. Leavenworth, P.E., Chief Engineer, via e-mail to MassDOTProjectManagement@dot.state.ma.us or via US Mail to Suite 6340, 10 Park Plaza, Boston, MA 02116, Attention: Hung Pham, Stormwater Program Coordinator, Environmental, Project File No. 608836. Project inquiries may be emailed to dot.feedback.highway@state.ma.us. 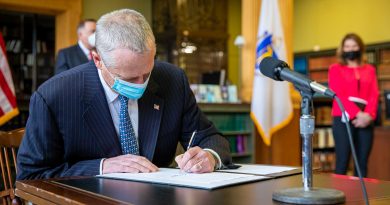