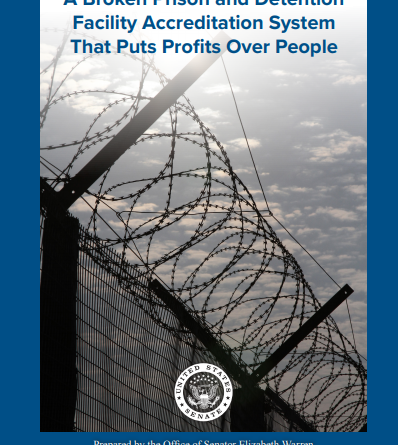 Her investigation confirms that the deeply flawed ACA accreditation system is riddled with conflicts of interest and fails to provide meaningful oversight of the facilities it accredits, resulting in rubber-stamping of dangerous facilities and the wasting of millions of taxpayer dollars.

Senator Warren’s 16-page report opens with troubling truth about the nation’s criminal legal and detention systems: “The criminal legal and immigration systems in the United States are broken. The criminal system incarcerates too many people, locks them away for too long, and fails to provide the formerly incarcerated with the necessary tools and support to successfully return to their communities upon release. The immigration system is similarly in shambles. Instead of providing refuge to vulnerable immigrants fleeing poverty and violence, including children and families, the Trump Administration is turning them away or throwing them into unsanitary and overcrowded facilities with little to no standards.”

Private prison companies derive immense benefits from these flawed systems. Federal, state, and local taxpayers spend billions of dollars propping up the private prison industry that profits off the backs of prisoners and detainees. These companies are driven by incentives that reward locking up more people in worse conditions, prioritizing their bottom line over the safety and well-being of incarcerated and detained individuals, corrections and immigration professionals, and communities.

“The primary result of the flawed ACA accreditation process is a system that ignores major problems and gives private facilities a free pass, putting the well-being of detainees, prisoners, and corrections professionals at risk,” Senator Warren’s report reads.

“To address these problems, the federal government, and state and local authorities, should end their reliance on ACA accreditation and stop outsourcing oversight of its prisons and detention facilities to for-profit organizations. The U.S. criminal legal and immigration systems are broken from top to bottom,” the report concludes. “Ending reliance on the ACA’s corrupt accreditation process is one small but important step in reforming that system.”

Senator Warren’s report is a result of her investigation into the accreditation of private prisons and detention facilities, during which she has demanded information on the ACA’s measures to prevent the spread of COVID-19. Senator Warren also led an investigation into private detention operators’ compliance with federal immigration detention standards and the private auditor responsible for inspecting detention facilities, Nakamoto Group, last year.

That investigation revealed that neither the private prison companies nor their private auditor, Nakamoto, have taken responsibility for grievous failures identified by the OIG — and also revealed a dispute between the Nakamoto Group, the contractor responsible for auditing detention facilities, and the OIG about the quality of Nakamoto’s inspections. 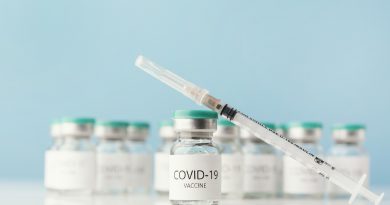 26 Inmates at MCI-Framingham Positive For COVID-19