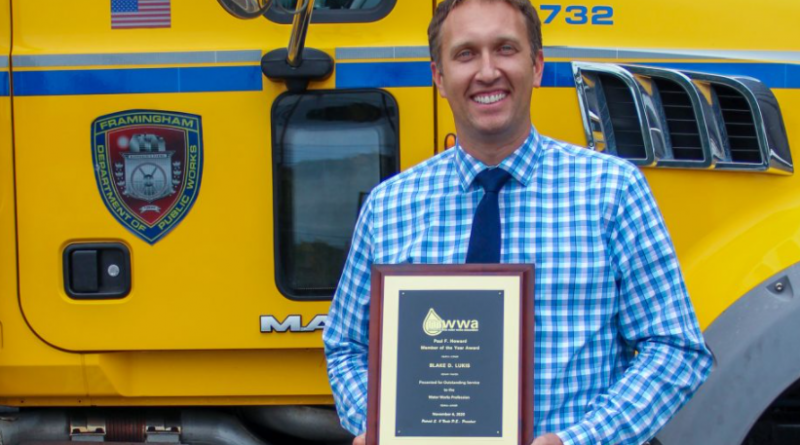 FRAMINGHAM – Framingham Public Works Director Blake Lukis received the Paul F. Howard Award, known as the “Active” Member of the Year Award from the Massachusetts Water Works Association (MWWA) for his knowledge, accomplishments, and contributions to the drinking water profession.

The award was presented to Lukis at the Framingham Department at Public Works, and a virtual awards ceremony will be held by MWWA in early November.

“Blake is an integral part of Framingham’s leadership team, and I’m thrilled but not surprised to see his skills recognized by an outside organization,” said Mayor Yvonne M. Spicer. “The City is fortunate to have him at the helm of its Public Works department.”

“Blake has been a member of our organization since 2007, and his contributions to the Massachusetts drinking water profession are immense,” said Executive Director of MWWA Jennifer Pederson. “He currently serves on the state’s Board of Certification for Operators of Drinking Water Supply Facilities and is our designee on the Safe Drinking Water Assessment Advisory Committee. He has also served in the past as MWWA’s President, on the Board of
Directors, and co-chaired the Education Committee.”

Framingham Coronavirus By The Numbers: 33 New Cases Since Friday; 108 Positive Cases, and 75 in Quarantine