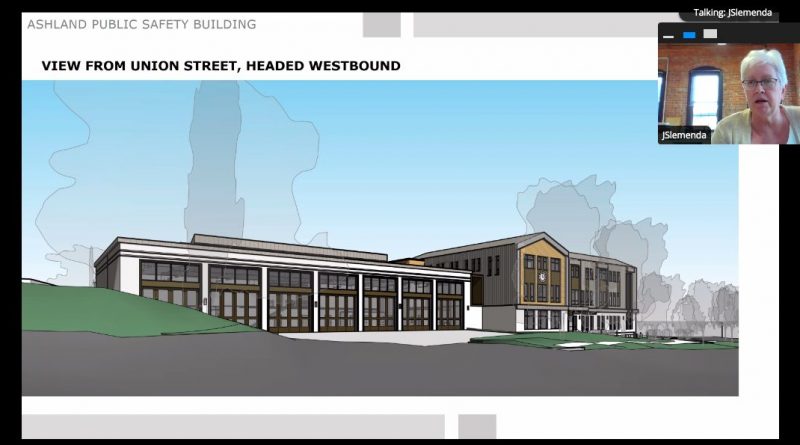 The property is set to be built by 2022 on the land gifted by Faford Properties to the Town of Ashland, at 12-15 East Union Street.

Chief Alfano began, describing the existing conditions at 137 Main Street, Ashland. The dispatch center within the station, “where all emergency 9-1-1 calls go in the town of Ashland,” Alfano said is “really antiquated, outdated, and cramped.” Conditions are especially tough “for the dispatchers who staff that 24 hours a day, 7 days a week.”

Alfano described the dangerous “open and exposed piping” throughout the station. There is also a copper roof, which is “very dangerous in ice and snow.”

“One of the biggest real deficiencies” Alfano said, is that there are “no facilities or provisions for those females within the building.”

The current facility also does not have a firing range, which is essential as “one of the primary tools of a police officer are their firearms.” “Right now we have to rent space and send our officers at an overtime rate to our range in Hopkinton.”

Alfano said that the most “dangerous area” is the book keeping area: “There is a handcuff bolted into the wall, where any prisoner no matter what they did is handcuffed.” Prisoners “can reach the officers” and in the past “they’ve hit officers with phones and computers.” He continued, “our jail cells are not adequate”; “It’s not safe for the officers. It’s not safe for the prisoners”

Fire Chief Keith Robie then explained the issues at the Fire Stations on Main St. and Cedar St., Ashland. Station 1, Main St. was built in 1928 and refurbished in 1992. “The station has had flooding issues in the past” Chief Robie reported and “currently its restricted by the railroad.”

The Cedar Street Station was built in 1988 and is used as an administrative center, however, Chief Robie confirmed that it “lacks office space” and “storage space.” Additionally, the shared gym between the Fire and Police Stations has “no windows” and “a problem with ventilation.”

Chief Robie and Chief Alfano then presented a new model of facilities. For the fire department there would be  “a room built for gear” with proper ventilation, “wide open” apparatus bays, training rooms, and joint communications of both public safety departments.

In the new facility, Chief Alfano noted that the “prisoners are not readily available to contact the officers:” “It’s a much more pleasant working environment for all of our public safety staff. And the key is, it’s safer.”

“Since 2018 this committee has held 25 public meetings to talk about the site,” Michael Herbert explained. “In 2019, we selected our owners project manager which is Vertex and also retained HKT architects.” He continued, then “we performed more site analysis” and submitted an ANRAD application that “gave us wetland lines that we needed to design a building.”

“This location gives you almost immediate access to the bridge over the railroad tracks,” Michael Herbert pointed out.

Janet Slemenda from HKT architects analyzed the property lines, zoning setbacks, topography, wetlands, bedrock elevations, and traffic and proposed the site plan. The new Public Safety Building will be significantly set back from the street, with parking in front and on the side.

On the first floor there will be a records room, dispatch, and meeting room located off the lobby. To protect staff, officers, and civilians “there will be bulletproof glass” and “there will be materials added to the walls to prevent bullets from passing.” Slemenda added that “everything off the first floor is geared towards police operations” and opposite the police side is the fire apparatus area and other rooms to support fire operations.

On the second floor, there are police support areas, including locker rooms, and living space for the fire department. The third floor is dedicated to Police and Fire administration.

“We really believe that everything we did to modify and work with this site will allow this building to continue to function very well for the next 50+ years,” Slemenda concluded.

The building will also have sustainable features such as a geothermal HVAC system, low flow toilets, electric vehicle charging stations, and insulated roof for the opportunity to install solar panels.

In total, the Public Safety Building will cost $36,704,153, with combined construction, design, administration, technology, and owner costs. However, Herbert said “We’re going to try to minimize the impact of any potential increase” on taxes. They will finance almost half of the project within the tax levy, no ballot necessary, and the rest through a debt exclusion, with a ballot.

The final steps will be to conduct a third party estimate of costs and make adjustments, then move into the bidding process at town meetings.

Finally, the timelines includes,a Town Meeting vote, and a town election with at least 2 questions, the Public Safety Building and the Mindess school.

Sydni Williams is a student at St. Mark School in Southborough, and a SOURCE intern for summer 2020.

Tree Down Knocks Out Power to 1,200+ in Ashland & Framingham