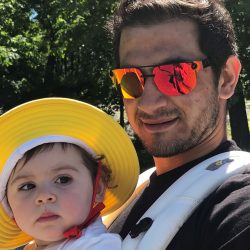 FRAMINGHAM – Armin Lewis Burdick, 27, of Millis, passed away Wednesday, April 29, 2020 as a result of an automobile accident.

Born in Boston, he was the son of Betsabeh Ghazian, George Burdick of Southborough, and father to Elora Burdick, age 2.

He returned to Westborough after 18 months at Swift River to graduate from Westborough High in 2013.

Soon after he worked for his father at Merrill Lynch as an intern/associate.

Armin however, decided his calling was working with his hands.

Last year, he landed his dream job at a prestigious landscape architecture firm, R P Marzilli of Medway. Armin was popular with his co-workers there who are “devastated” by the loss of Armin. Armin was on his way to work to a work site when the accident occurred.

He was loved by those who knew him for his personable nature, mischievous smile, and  humor. His playful humor was best illustrated the Sunday the 26 in a visit to pickup Elora to go to the local park. He hid in the bushes, and sprang out as she was being walked out for the visit evoking screams from both Grandpa and Elora.

When Armin wasn’t working or visiting Elora, Armin enjoyed working out at 24 hour fitness in Medway and Ashland (close to Elora). He traveled with his father to Dover, NH last year, earning his USAW level 1 over a two-day period at Everproven Crossfit. He liked helping others in the gym and was in the process of studying for his Certified Personal Trainer (CPT) designation.

Armin valued his childhood friendships in Millis formed through soccer but particularly Pop Warner football that culminated in a championship. Through middle school, although enrolled in Millis, he played soccer for the Westborough Lazers as they achieved a perfect record. He attended Westborough Cub Scout pack and graduated to Boy Scout.

Armin loved the outdoors, especially fishing and camping. He went on many trips with the Scouts, and with his father camping. He enjoyed the many pontoon boat rides on Long Lake in Maine with his grandparents. One year even his beloved uncles Dar and Hooman visited, partaking in boat rides and hot tub soaking.

He visited his grandparents in Florida for Christmas through the years until they sold their home a few years ago. He went on a cruise with his mother and traveled to Europe with her to visit relatives when he was young child. His love of outdoors and adventure reached an apex in 2006 when he went  on a 10-day Africa safari with his dad. In fact, he recounted his visit to Tanzania and Zanzibar in a class presentation.

Armin attended the Faith Community Church in Hopkinton with his dad. He was on his journey in Christ. A baptism for late spring, early summer was discussed.

Armin’s life can’t be complete without discussing the light of his life, Elora. She has brown eyes with curly hair like her dad, and orange-reddish hair with beautiful skin like her mom, Noelle. Elora is sassy and likes to be silly, it’s not hard to figure out where that came from.

God, his grandmother (Moman), grandfather, and unfortunately even a couple friends who also were gone far too soon, will be entertained by Armin in heaven. He is at peace in a beautiful tapestry of unending landscapes perfected by our father for him to enjoy. To you Armin we say, “may we be so lucky to meet your kind soul in heaven, with much love from your family and friends”.

Arrangements are being held privately and are under the care of the Chesmore Funeral Home of Hopkinton. 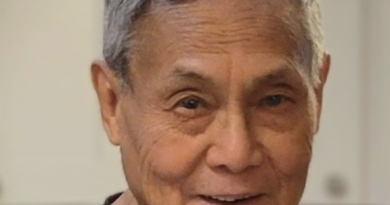 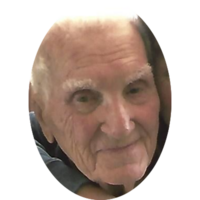