FRAMINGHAM – Framingham Police arrested a man with no address Friday night, after he stole an Amazon package from a home and broken into multiple vehicles on Clinton Street.

He was charged with larceny (daytime) and receiving stolen property under $1,200.

Police said he was trying car door handles, for open doors, in the neighborhood.

He stole a wallet and credit cards from one car, said Lt. Patricia Grigas.

He was “found” with an “Amazon package that was delivered to the Clinton Street address where he as arrested,” explained Lt. Grigas.

He may have broken into multiple vehicles. 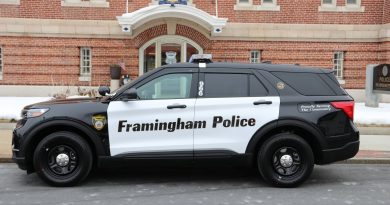