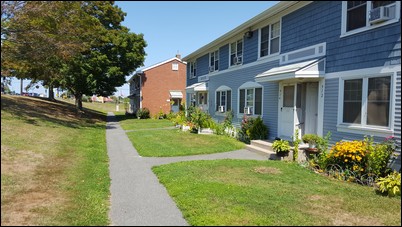 FRAMINGHAM – Ameresco, an leading energy efficiency and renewable energy company, and the New Bedford Housing Authority, announced this week the execution of a $12.7 million Energy Performance Contract that is expected to provide $19.6 million in energy and water cost savings over its sixteen-year term.

It will focus on roof-top mounted solar installations in conjunction with significant incentives available from the Commonwealth’s Solar Massachusetts Renewable Target, or “SMART” Program. Upon completion of construction over the next 15 months, the solar installations at 11 of the 15 developments will result in 2.4 megawatts of power generation, significantly reducing Authority’s electric consumption. In addition to the solar installations, other energy savings measures include water conservation, exterior and common-area lighting upgrades, and boiler replacements.

“Ameresco is pleased to be building on our staff’s 20-year relationship with the New Bedford Housing Authority,” said David J. Anderson, Executive Vice President and Director at Ameresco. “One of the very first energy performance contracts in Massachusetts was a major central plant decentralization with NBHA that our staff-led. Now, we are able to upgrade the Authority’s developments with more advanced technologies while also reducing its carbon footprint.”

Under an EPC financed using savings from NBHA’s utility operating funding, there is no up-front cost required of the Authority.

With more than 30 years of experience, Ameresco’s public housing team has implemented performance contracts with project capital exceeding $700 million in North America. Ameresco has implemented improvements for over 130,000 households (and counting) under performance-based energy and water services contracts.

Founded in 2000, Ameresco, Inc. is an independent provider of comprehensive services, energy efficiency, infrastructure upgrades, asset sustainability and renewable energy solutions for businesses and organizations throughout North America and Europe. Ameresco’s sustainability services include upgrades to a facility’s energy infrastructure and the development, construction and operation of renewable energy plants. Ameresco has successfully completed energy saving, environmentally responsible projects with Federal, state and local governments, healthcare and educational institutions, housing authorities, and commercial and industrial customers. With its corporate headquarters in Framingham, Ameresco has more than 1,000 employees providing local expertise in the United States, Canada, and the United Kingdom.