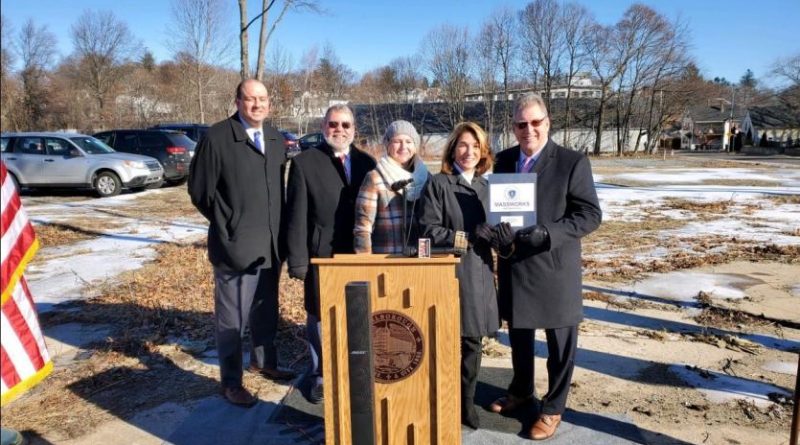 Photos and release courtesy of the Commonwealth of Massachusetts.

The infrastructure project includes upgrades to the roadway from Broad Street to the Assabet River Rail Trail for ADA and Complete Streets compliance, as well as an upgrade of the underground gas utility, on-street parking and streetscape improvements and installation of traffic signals.

A three-phase private development will, at full build out, produce 247 units of market rate housing and nearly 19,800 square feet of commercial space. The project is within walking distance of an MWRTA bus line, the Assabet River Rail Trail, and downtown Marlborough.

“MassWorks is a valuable program that maximizes return on investment for capital funding, delivering vital infrastructure repairs that improve public safety while stimulating local and private development, job growth and housing production,” said Governor Charlie Baker. “We will continue to collaborate closely with local leaders to identify opportunities and target public resources toward the growth and wellbeing of communities across the Commonwealth.”

“This administration recognizes the importance of reliable, modern infrastructure to the safety and success of communities of all sizes,” said Housing and Economic Development Secretary Mike Kennealy. “We are proud of the improvements to public safety, thousands of new jobs and housing units, and millions of square feet of new commercial space that the MassWorks program has delivered for residents, and we look forward to continuing to leverage every tool at our disposal to ensure all 351 cities and towns in Massachusetts continue to thrive.”

The Lincoln Street infrastructure project will build on the town’s revitalization strategies for its downtown and French Hill areas, including the acquisition of a key parcel of land, the adoption of mixed-use zoning and 43D Expedited Local Permitting, and local investment of more than $7.5 million in public infrastructure improvements and predevelopment site work.

The project leverages $1.5 million in local funds and a $5 million MWRA loan for the replacement of lead pipes.

“We are very excited to be receiving this MassWorks grant, which is the first step in a long-term effort to bring back our French Hill Neighborhood. This project will include the complete renovation of the Lincoln Street area from the bike path on Highland Street to Broad Street,” said Marlborough Mayor Arthur Vigeant. “I would like to again thank the Baker-Polito Administration for their continued partnership on this project. When local and state governments work together, everybody wins!”

“I’m grateful to the Baker-Polito administration, and the Housing and Economic Development Secretary Mike Kennealy for providing a $2 million MassWorks grant to the city of Marlborough, to improve the Lincoln Street corridor, adding multiple housing and retail spaces,” said Senator Jamie Eldridge. “I commend Mayor Arthur Vigeant for his continued commitment to infrastructure improvements for the city of Marlborough, and I’m pleased to have advocated for this MassWorks grant alongside the Marlborough legislative delegation last year.”

“The French Hill neighborhood will benefit greatly from this generous grant which will compliment local funding of the project,” said Representative Carmine Gentile. “I am happy to see more mixed-use, transit oriented development in an area that is well suited to such growth and look forward to the project’s completion.”

“My grandfather was raised in the French Hill section of our City,” said Representative Danielle W. Gregoire. ”I am excited to be here today to celebrate this tremendous investment in his former neighborhood.  After much advocacy for this project, I am looking forward to seeing the improvements that will be made to make way for housing and retail space in our community.”

Through the 2019 MassWorks round, the Baker-Polito Administration will award more than $72 million in MassWorks awards to a diverse mix of 36 projects in 35 communities across the Commonwealth, including nine Gateway Cities and eight communities that will receive MassWorks funding for the first time.

The awards will unlock a total of $2.3 billion in private investment and more than 4,600 new full-time jobs, along with more than 3,100 new housing units, more than a third of which are affordable, building on the Administration’s efforts to tackle the ongoing housing shortage through complementary programs like historic funding for affordable housing and the proposed Housing Choice legislation.

The transformative projects funded by the 2019 awards were selected from 92 applications, totaling $223 million in requests.

Since 2015, the Baker-Polito Administration has awarded more than $456 million in MassWorks grants to support 219 shovel-ready projects in 141 communities.

MassWorks funding has leveraged over $9.2B in private investments and made possible the creation of more than 14,000 new housing units and tens of thousands of construction and permanent jobs.