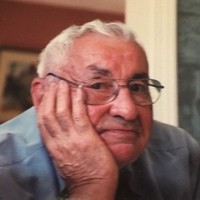 A lifelong resident of Framingham, Edo was the eldest child of Virginio and Maria (Mei) Grandoni of Pesaro, Italy.

After serving in the Army in Germany during World War II, Edo took a job at Dennison Mfg. in Framingham where he met his future bride Barbara (Spinazolla) Grandoni with whom he shared 67 years of marriage.

He worked his way up the ladder at Dennison from shipping clerk to Export Manager and was a dedicated employee for 45 years.

A member of the Greatest Generation, Edo had an old-school work ethic and a philosophy of never throwing anything potentially useful away.

Along with his best friends, his brothers-in-law Bob Hinckley and Bill Pinchook, Edo scoured the yard sales of Framingham and Cape Cod for treasures that could be repurposed or passed on to his sons and granddaughters.

He was a voracious reader of paperback books and loved reading and relaxing in his home of 67 years in Framingham or at “the cottage” in Eastham on Cape Cod with his granddaughters on the hammock.

He also spent many happy hours digging for quahogs on the Cape with family and friends.

He was a master of DIY and enjoyed countless hours of home maintenance and improvement projects.  He also loved puttering and gardening around his beloved home in Framingham and in Eastham. Edo had an outgoing manner and a large circle of friends.

Edo is survived by his loving and devoted wife Barbara, his sister Ada Pinchook of Framingham, his son Rick and his wife Diana of Beverly, his son Jerry of Ashland, his granddaughters Christina and her wife Gillian of Bradford, Diana of Portland ME, Maria of Fitchburg, WI and Alison of Boulder, CO. and many loving and devoted nephews and a niece.  He was pre-deceased by his sister Jeanette Hinckley of Framingham.

A truly loving, generous, intelligent and devoted husband, father and grandfather, Edo was above all, a family man who loved being “King of His Castle”.   He would do anything for his kids and grandkids and loved spending time doing projects or going on outings with them.  Throughout his life he was a source of unwavering and unconditional support and stability.  He will be greatly missed but his spirit will live on in all of us.

Relatives and friends are kindly invited to attend a time of visitation on Thursday, December 19, 2019 from 5-8 p.m. at the Norton Funeral Home, 53 Beech Street (Corner of Union Ave.) in Framingham.

His funeral service will be Friday December 20, 2019 at 9 a.m. at the Norton Funeral Home.

Burial will follow in St. Tarcisius Cemetery in Framingham.

In lieu of flowers, donations in his memory may be made to Alzheimer’s Assoc. MA/NH Chapter, 480 Pleasant Street, Watertown, MA 02472 or the charity of one’s choice.READ LESS