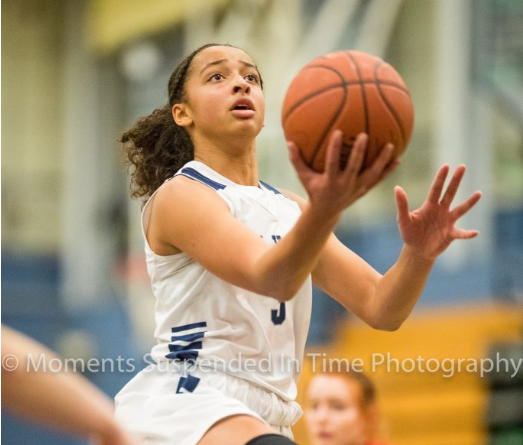 The Flyers defeated the Wildcats 60-29, led by freshman Selina Monestime, who scored 22 points and had 10 rebounds in the victory.

“A leader on the court that distributed the ball well to her teammates and knew when you to take it herself,” said head coach Kristen Fucarile, of her leading scorer Friday night.

Her sister senior captain Vienna Monestime is out for the season with a should injury, but was cheering on her team all night long.

“It was a great team effort tonight. We have a young team that is starting to get use to one another. It was an exciting game to watch and the best news it wasn’t our best game,” said coach Fucarile.

“She is recovering from a major surgery in April and had a great first week back,” said her coach.

“We have a young team with 2 freshmen, 1 sophomore, 1 junior and 1 senior starter. We are going to be a fun team to watch this season, especially when we get more used to each other on the court,” added the coach.

Before the game, the Flyers gave flowers to Christine Suau, as the girls’ basketball team dedicated its home opener to the late Devin Suau for the third time. Suau lost his battle with DIPG in October 2017.

The Flyers next game is on the road Tuesday, December 17 against the Tigers of Newton North High School. Tip-off is 6:30 p.m.

Photos by Brendon Curtis of Moments Suspended in Time Photography for SOURCE. High-resolution photos are available for purchase.