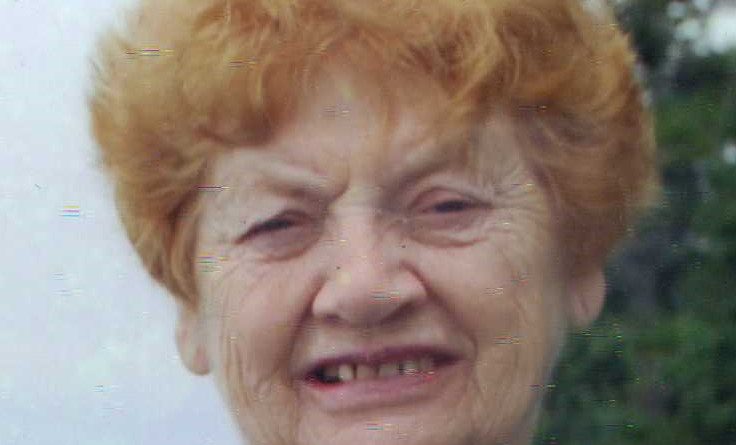 A devoted daughter, wife and mother, she was born in Jamaica Plain to the late Henry and Louise (Martin) Curtis.

While a teenager she met Thomas G. Martin III at the Boston YMCA and they married 4 years later. He gave her the world, and they traveled around it, visiting Ireland, Canada, Japan, Hong Kong, Paris, Quebec, Mexico, the Bahamas, Bermuda, England, as well as most of the US. Hawaii was one of their favorite destinations, and they returned there several times.

They settled in Framingham and brought up their daughters, Kathleen and Dorothy there. They were members of St. Bridget’s Parish.

For many years, Beverly worked at Framingham State College and entertained Thomas’ work colleagues from the US Army Natick Labs.

In addition to traveling together, Beverly and Thomas were born to dance, and their Rumba was award-winning.

They loved each other, and their girls, deeply.  Yet their lives were not without tremendous sorrow. Their beloved daughter Kathleen Kearns and grandchildren Jennifer Marie and Scott William Kearns predeceased them.

They poured much of their overwhelming grief into creating beauty; Thomas painted, while Beverly devoted much of her energy into gardening and flower arranging.

Following Thomas’ retirement in 1996, they moved to Cape Cod, but that same year he passed suddenly.

Beverly is survived by her daughter: Dorothy Martin Simone of Plymouth. She and Dorothy traveled and hiked together throughout much of New England in recent years.

She was predeceased by her siblings: Robert Curtis, Lorraine Martin, Christine Anderson and Henry Curtis. She was the loving aunt to Joanne Nordby of Wisconsin, the late Charles “Duke” Curtis, the late Michael Anderson, Charles “Henry” Martin of Tennessee and Delores “Dolly” Anderson of Kingston.

Her beautiful smile, loving soul, and kind heart will also be missed by generations of cousins as well as the friends whose lives she touched.

A funeral Mass will follow at St. Bridget’s Church, 830 Worcester Rd., in Framingham Centre at 10 a.m.

Interment will be at Edgell Grove Cemetery in Framingham Centre.