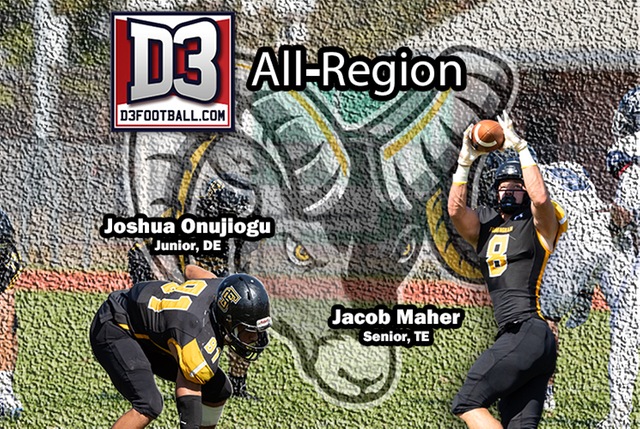 The following is a press release submitted to SOURCE media.Photo courtesy of Framingham State athletics.

A total of 78 players were chosen. Players nominated for All-Region are eligible to be considered for D3football.com All-America honors, which will be announced on December 20.

Onujiogu, a second team defense selection, earns his first D3football.com All-Region honors after previously being named the Massachusetts State Collegiate Athletic Conference (MASCAC) Defensive Player of the Year and a first team All-MASCAC selection.  Onujiogu finished the season with 52 total tackles including 28 solo stops. He recorded a team-best 14.5 tackles for a loss with 8.5 sacks.  Onujiogu recorded a pair of pass breakups on the year and forced a fumble.  The 2019 Ram defense allowed just 92.4 yards rushing per game and 291 total yards per contest.

Maher continues to rack up honors after his senior season as he was previously recognized with selection to the 2019 American Football Coaches Association (AFCA) Division III Coaches’ All-America First Team. Maher was also an All-MASCAC first team selection and named to the New England Football Writers College Division All-New England Team.  In 2019, Maher made 56 receptions on the year for 819 yards with eight receiving touchdowns.  Maher averaged 14.6 yards per catch, led the Rams with 68 points and carried the ball 20 times with three rushing scores.

Maher, who transferred to Framingham State this fall, was a D3football.com First Team All-East Region selection in 2018 and 2017 while playing for Worcester State.

The Rams finished the 2019 season as the MASCAC Champions at 8-3 overall and 8-0 in league action.

The Rams received the conference’s automatic bid to the 2019 NCAA Division III Football Championship and were defeated by Wesley College in the opening round.