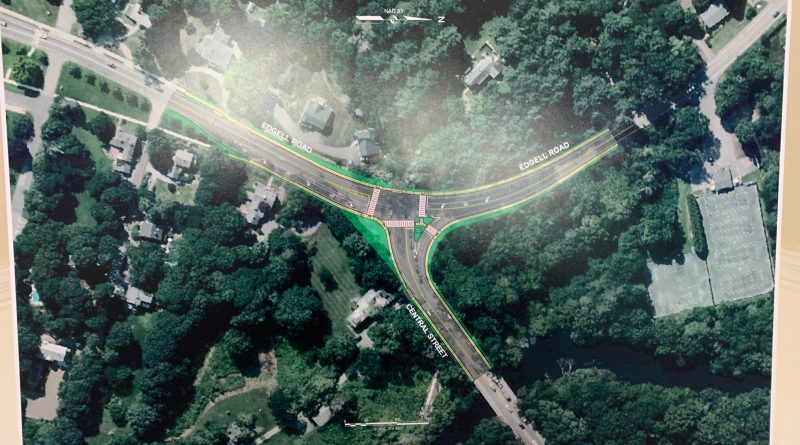 .The project is currently at 25 percent completion, and scheduled for construction in summer of 2022.

According to a “Traffic and Safety Improvements” packet given out at the meeting, the “purpose of the proposed project is to improve vehicular operations and safety by addressing congestion issues on Central Street and addressing existing sight distance deficiencies.”

According to MassDOT staff, there are several factors that may warrant the introduction of a traffic light.

The proposed improvements will (according to MassDOT):

Though there was a consensus in the room that something needs to be done about this intersection, there were questions from citizens over whether a traffic light is the most appropriate solution.

Traffic data collected from the intersection as part of the study required for the project show that currently, individuals taking the right-hand turn are going an average of 37 mph.

The speed limit is only 30 mph.

“There is a larger problem that needs to be addressed,” Mackin said. He believes the traffic light is merely putting a bandaid on the issue as a whole.

Currently, the wait time for a left-hand turn at the intersection is three to five minutes during peak hours, which is an “F”.

With the addition of a light, MassDOT hopes to lower the wait time to 45 seconds, which would be given a “D”.

Project officials admitted at the meeting that though this project may reduce traffic on Central Street, it may increase traffic on Edgell Road.

Many residents urged MassDOT to consider a more holistic approach to Framingham’s traffic problem. A couple of dozen residents attended the meeting at Historic Village Hall.

Once construction begins, it will take approximately 18 months to finish.

The timeline for the project following tonight’s meeting is: