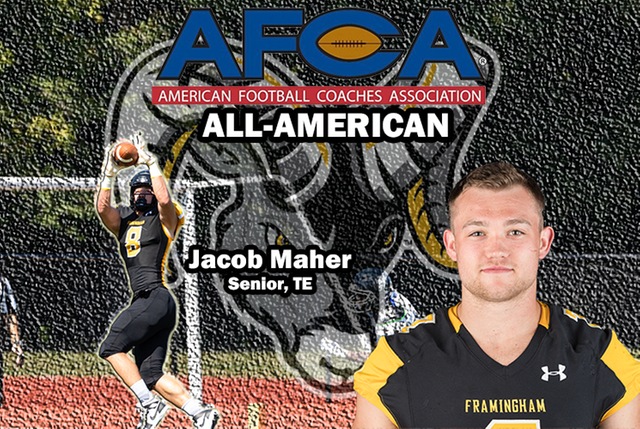 In 2019, Maher made 56 receptions on the year for 819 yards with eight receiving touchdowns.  Maher averaged 14.6 yards per catch, led the Rams with 68 points and carried the ball 20 times with three rushing scores.

Maher, who transferred to Framingham State this fall, was previously recognized by the AFCA with All-America honors after the 2017 season in which he caught 56 passes for 986 yards and 14 touchdowns while playing for Worcester State.

Maher is just one of three players to earn AFCA All-America honors at two different schools.

Maher and defensive lineman Kyle Johnston from Massachusetts Maritime Academy, a third-team selection, are the only honorees from the MASCAC on the AFCA All-America teams.

The AFCA’s Division III All-America Selection Committee is made up of head coaches representing each conference from each of the AFCA’s eight districts, one of whom serves as a district chairman, along with another head coach who serves as the chairman of the selection committee. The coaches in each district are responsible for ranking the top players in their respective districts prior to a conference call between the district chairmen and the committee chairman on which the team is chosen.

The Rams finished the 2019 season as the MASCAC Champions at 8-3 overall and 8-0 in league action.

The Rams received the conference’s automatic bid to the 2019 NCAA Division III Football Championship and were defeated by Wesley College in the opening round.