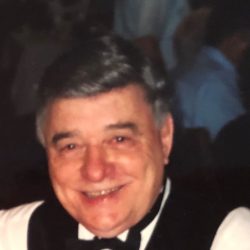 Born in Revere, he was the son of the late Margaret J. (Clark) and Domenico J. Russo.

He was the husband of 50 years to Sarah (Stoughton) Russo of Holliston.

Edward was a Navy Veteran of the Korean War from 1951-55, where he was a member of the Navy School of Music and served in the Admiral’s Personal Band.

Edward traveled the world playing music and making people happy, before settling down with his darling bride Sarah, whom he met on Cape Cod when both were performing in their own musical groups.

He earned his Bachelor’s degree at Lowell State and his Master’s degree at UMASS Boston, before becoming a beloved public school band director in Arlington and Framingham for over 32 years.  He offered private music lessons and was conductor of the Framingham Symphony Orchestra.

When they moved to Holliston with their 5 children, Edward and Sarah got the children string lessons, and created a family group, The Russo Family Singing Strings. They performed around New England, and even won top honors on local tv favorite “The Dave Maynard Talent Showcase” in the 1980s. The family still performs together for special events at church.

In his later years, Edward started his own swing band, Boots & Co, and The  Eddie Russo Swing Band, with whom  he released several CDs.

His final project is a live “Boots Russo” CD, recorded with his son-in-law, Blake Thompson. It is currently in production and scheduled for release in 2020.

Edward was a man of God who loved Jesus with all his heart. He couldn’t wait to go home to his Lord, Savior and “Hero” Jesus Christ. Ed was a generous man and devoted father who enjoyed practicing his instruments, playing music, reading and spending time with his wife.  He will be deeply missed by his friends, family and all that knew him.

Besides his wife, Edward is survived by his 5 children, Joseph Russo and his wife, April, Kathleen Thompson and her husband, Blake, Edward Russo Jr., Jean-Paul Russo, and Anthony Russo. He also leaves behind his beloved grandchildren, Dayle, Vinny, Natalia, Blake Jr., Sarah, Josie and Rachel.

Visitation will be held on Saturday, December 7 from 10-11 a.m. at the First Baptist Church in Framingham (1013 Worcester Rd). A funeral service will be held in the church following visitation at 11 a.m.

Burial will be held privately.