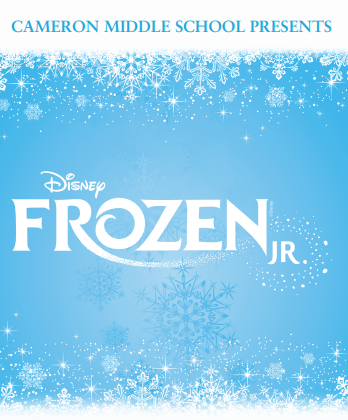 All performances are held at Cameron Middle School Theatre at 215 Elm Street).

Tickets can be purchased online at www.showtix4u.com.

Only general admission seats are available for the upper balcony. Hurry, because these will sell out.

Based on the Disney film written by Jennifer Lee and directed by Chris Buck and Jennifer Lee, Frozen Jr. is also based on the original 2018 Broadway production of Frozen was directed by Michael Grandage and produced by Disney Theatrical Productions

The show features all of the memorable songs from the animated film, with music and lyrics by Kristen Anderson-Lopez and Robert Lopez, plus five new songs written for the Broadway production.

A story of true love and acceptance between sisters, Frozen JR. expands upon the emotional relationship and journey between Princesses Anna and Elsa. When faced with danger, the two discover their hidden potential and the powerful bond of sisterhood. With a cast of beloved characters and loaded with magic, adventure, and plenty of humor, Frozen JR. is sure to thaw even the coldest heart!

The show is directed by Teri Shea and Chris Brindley. Assistant Director is Tristan Burke. Shea is also the choreographer.

Music Direction by Sammy Goldberg. The orchestra is conducted by Chris Dupuis.

Scenic and Lighting Design by Kyle Trumble, with Projection Design by Matt Kizer , and sound design by Mark DeLuzio.