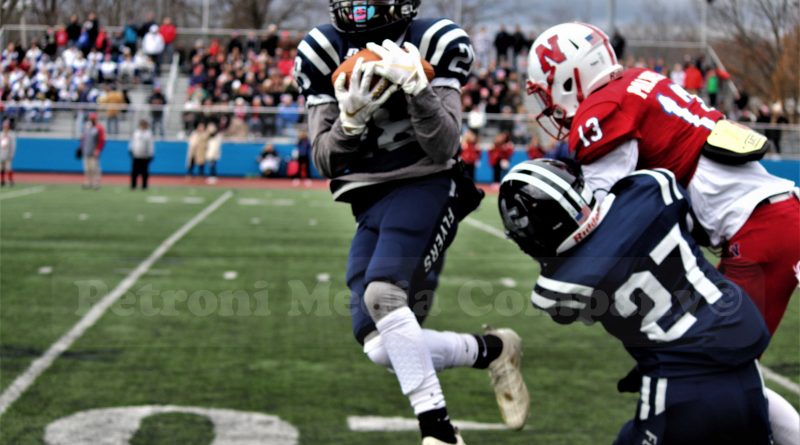 The win brings the trophy back to Natick, as the Flyers had owned the trophy after defeating Natick at Fenway park last year.

The game started out sunny for the fans and Framingham.

A fumble on the opening kickoff, recovered by Framingham sophomore Joe Ferrante gave the Flyers points on the board just six seconds into the game.

Framingham intercepted Natick on its opening drive, and Flyer senior quarterback Jack Beverly threw a 72-yard touchdown pass to RJ Viele to give the Flyers a 12-0 lead, two minutes into the game. It was Beverly’s 53rd touchdown of his career.

That touchdown pass by Beverly gave him more than 6,000 yards in his career as a Flyer.

While the opening two minutes belonged to the Flyers, the rest of the game was all Redhawks.

Junior Jake Dunlap intercepted the ball and took it into the endzone for Natick’s first points on the scoreboard. Sam Waltzman’s extra point made it 12-7 Framingham with 2:30 left in the first quarter.

Natick junior running back Jayln Aponte scored from 13 yards out to give Redhawks their first lead of the game at 14-12. Natick took that lead into halftime.

Natick extended the lead to 28-12 at the end of the third quarter and add more points in the fourth quarter.

Framingham ends the season at 4-7. Natick owns the Elks Trophy until the 115th matchup between the two rivals in the Bay State Conference.