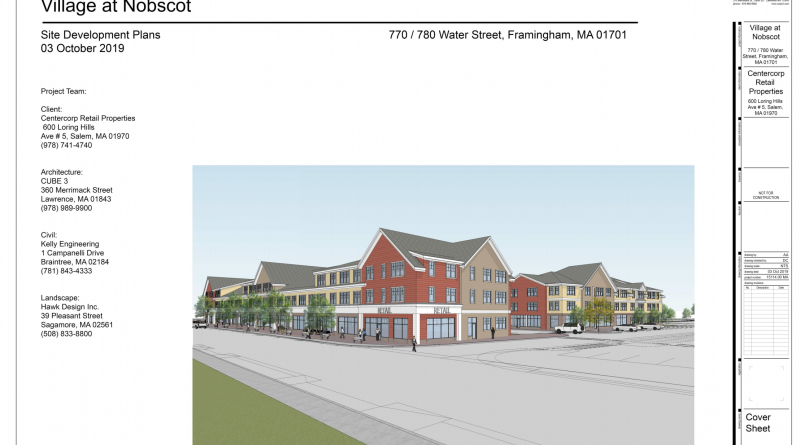 FRAMINGHAM – The Framingham Planning Board got its first look at the proposed redevelopment of the almost empty Nobscot plaza last night, October 30.

It was a standing room only crowd, as there were not enough chairs for everyone in the room. October 30 marked the first public hearing of the Village at Nobscot project.

The first part of the hearing was a presentation by the project team that included a traffic study, landscaping design plans, and a building layout plan.

The goal of this project is to ‘renovate and revitalize’ the Nobscot Plaza.

David Kelly, of Kelly Engineering, said the project will have three sequences:

Though the plans show three different lots for the chapel, the CVS, and the mixed-use buildings, Kelly said the Village at Nobscot will still blend together as one.

There will be no fences or plotlines between the three, said Kelly.

Because the developers are viewing the project as though it is all one property, as opposed to three different lots, the total amount of green space/open space is more than 20 percent.

“My big problem with this is the density, it’s all parking space and buildings. I know you say there’s 20 percent open space but it’s in bits and pieces,” Said Planning Board member Shannon Fitzpatrick, who hails from District 1.

According to the development team, the landscape design plan currently includes drought native species and ornamental non-native, non-invasive species of trees and shrubs and several plants that are drought tolerant.

The vegetated areas of the site plan are intended to soften the hardscape features.

But both Planning Board Chair Christine Long and Fitzpatrick had issues with the specific plants listed.

“I hope you will remove the oak trees because they are very difficult to maintain on-site,” Long said.

Fitzpatrick said although the development team wants to use many native plants on site, many of the plants on the plan are not native.

Fitzgerald asked the developers to reconsider what they will plant.

Data from the study was as recent as September 2019.

The study took into consideration the fact that most of the site is currently vacant and accounted for the cumulative plans for the future growth of projects in the area, said Kalikiri.

Though the team originally proposed 12 potential street parking spots along Water Street, both the public and Planning Board turned them down.

“I can’t think of a bigger way to have gridlock in Nobscot,” said Framingham resident Kathy Vassar.

According to the findings, the traffic impact the Village at Nobscot will have as a mixed-use and retail area is lower than if the area were solely a retail spot.

One of the biggest concerns shared by both the public and the Planning Board is the financial viability of this project. There has not been a marketing or real estate study done.

Planning Board member Kristina Johnson believes this is necessary in proving the project’s feasibility.

“I’d like to see a marketing study to see what kind of tenants are going in [the retail spaces],” he said.

Calvo said he is hopeful the project will include spaces such as cafes or something useful for the community where they can gather, as opposed to a barbershop or an ATM.

“The village at Nobscot, there is no village,” said Framingham resident Gerald Bloomfield.

As of right now, there is nothing warm or endearing in the proposed plan, nothing for community members to connect to, said Bloomfield, who lives in Precinct 1.

Planning Board member Johnson also asked about the relationship to the existing neighborhood.

Engineer David Kelly said it is a modern re-interpretation of what’s already there.

Johnson did not believe this was visible in the rendered plans.

Visual renderings of the relationship the Village at Nobscot has to existing landmarks and buildings will supposedly be included in the presentation at the next public hearing.

Another issue brought up by the public was the location of the dumpster. The dumpster, which will collect the trash for all 158 residential units, has had its location moved several times.

“While it’s located further from the apartments, it seems to be nearer to the residential homes that are there and I worry about restricting noise after the hours of operation,” said Vassar.

Neighboring residents expressed concern over the fact that the dumpster is now closer to their properties than to the actual apartment buildings.

According to the project team, the dumpster has been moved several times and though they apologize for where it will be located, that is what worked the best.

A peer review is required before the approval of this project.

The review is something both board members and members of the public believe will address concerns over things such as project density, impact on schools, traffic, etc.

The Planning Board is in the process of obtaining someone to conduct this review.

The next public hearing on the Village at Nobscot will take place on November 14.