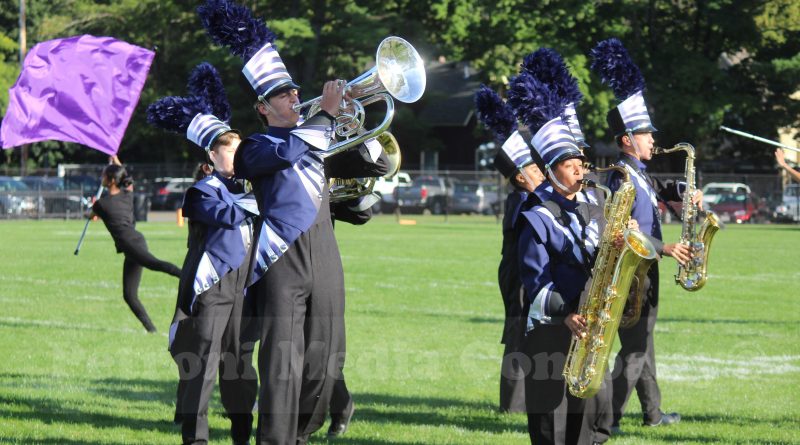 With a score of 80.8, the Flyers earned a silver medal performing The Legend of Sleepy Hollow, which features music from the movie/ TVshow.

“Shepherd Hill is our greatest competition and the next time we will face them will be at NEBSA championships in Lawrence on November 3,” said band member Aidan Beckman.

The band is under the direction of Andy Jasinski.

The Flyers next competition is Saturday in Wakefield.

The public is invited to a FREE performance of the marching band’s competition show on Tuesday, October 8 at 5:30 p.m. on the field behind Framingham High School.

The marching band works “so hard and there are a lot of new members this year. The work is grueling, takes a lot of concentration and emotional focus. Playing an instrument and marching is difficult,” said Jasinski.

“Our dilemma is that we still have ‘show jitters,’ when we’re performing for an audience. It is typical at this point in the year for us to have already done 4 football games in addition to a few shows, so we’re more used to it. Of course, because of cancelled or moved games, we haven’t had the chance to play for an audience as often as we would like to,” said Jasinski.

“For those who have children interested in band, this would be a great opportunity for them to watch up close,” said the band’s director.