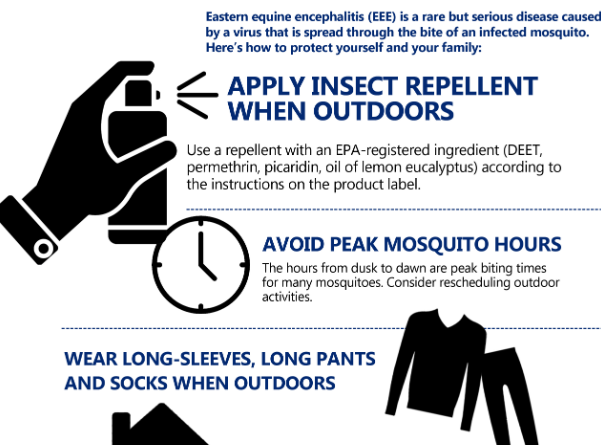 EEE is a very rare disease. Since the virus was first identified in Massachusetts in 1938, fewer than 100 human cases have occurred, but there have been eight positive cases this year.

More than 60 percent of those cases have been from Plymouth and Norfolk counties, but this year the mosquitoes and the cases have migrated to Middlesex County and Central Massachusetts.

Eight humans have tested positive for EEE this year, including an Ashland man, and a Sudbury girl, age 5. One person has died from the disease, which has a 30 percent mortality rate. And 80 percent of those who test positive, may have some lasting neurologically damage.

The most recent outbreak of EEE in Massachusetts began in 2010 and included nine cases with four fatalities through 2012.

The first symptoms of EEE are fever (often 103º to 106ºF), stiff neck, headache, and lack of energy. These symptoms show up three to 10 days after a bite from an infected mosquito. Inflammation and swelling of the brain, called encephalitis, is the most dangerous and frequent serious complication. The disease gets worse quickly and some patients may go into a coma within a week.

There is no treatment for EEE. In Massachusetts, about half of the people identified with EEE died from the infection. People who survive this disease will often be permanently disabled. Few people recover completely.

One of the key discussion points was on how to protect yourself.

The state has been providing aerial spraying and the East Middlesex Mosquito Control Project has been conducting ground spraying, but Framingham Health Director Sam Wong said individuals need to take their own precautions.

“Aerial spraying and ground-level spraying can only do so much,” said Wong. “It is not going to eliminate these mosquitoes.”

Framingham’s level is at critical. The Framingham Board of Health has voted to prohibit activities on city-owned property from dusk to dawn.

The threat for these mosquitoes will not disappear until a hard frost has occurred this year.

But here is what residents should do if they go outside: