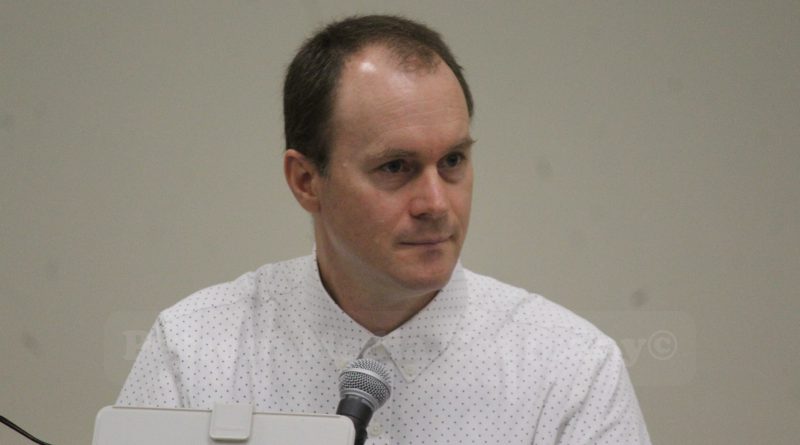 Editor’s Note: On Tuesday, September 17, Voters in District 8 will participate in a preliminary election. There will be three names on the ballot for District 8 School Committee. Voters will sect one individual to replace incumbent Gloria Pascual. SOURCE sent questionnaires to all three candidates. Two of the three returned the questionnaires. District 8 is comprised of Precincts 15 & 18. Both precincts votes at St. Tarcisius.

The report was updated at 4:15 p.m. to reflect the candidate’s age, that was incorrectly submitted.

Have you ever been elected to office? (If yes, list position): No

Have you ever been elected to a leadership role with a PTO? (If yes, list position): No

At this time, what letter grade would you give Superintendent of Schools Bob Tremblay? B+

What was the last Framingham Public School event you attended: The Back-to-School picnic

I would bring _______ to the School Committee. (just one word): Perspective

Would you have voted to support the new FTA contract? (yes or no) Yes

Would you have voted to award a new 6-year contract to Superintendent Bob Tremblay? (yes or no) No

1) Why should voters in District 8 elect you to the Framingham School Committee?

I’m honest, direct, and unafraid of having difficult conversations.  I ask the hard questions, analyze data, and make decisions based on both the facts and the human needs.I served on the Framingham Board of Public Works, which at the time was the water and sewer rate setting authority.  Historically, Framingham used a 3 tier rate system where you could use a certain number of units at a low rate, then a certain number of units at a higher rate and anything over that was at the highest rate.  Shortly after the reconstruction projects started, the need for revenue forced the rates to rise. The CFO and the Director of Public Works noticed that given the usage patterns, in order to get enough revenue with the usual tier rate adjustments the bills for the lowest users, typically on fixed incomes, would have to increase dramatically, which was not acceptable.  I asked if it was law that we had to use 3 tiers at those levels. They said no, but it had always been done that way. I suggested breaking the lower tier at the level expected for an elder couple with no children and dropping that rate to the wholesale MWRA rate.  I further suggested breaking the upper tier at the level just below the level of the largest corporate accounts, and dramatically raising the rates for them since they would barely notice.  The middle tiers could be filled in and adjusted in the usual manner. This 5 tier proposal was implemented and has over the years shifted much of the cost from those least able to pay to those most able to pay.On the school committee I would apply the same analytic skills and sensitivity to human factors when faced with issues in educational policy, budgeting, and oversight.

2) In your opinion, what is the biggest issue facing the Framingham Public Schools? Give three specifics things you would do to fix the issue.

The biggest problem is that we don’t have an equitable distribution of resources and access to opportunities.  That applies at the neighborhood level, at the school level, and at the individual student level. Equity is at the core of many other problems.I will continue, in an official capacity, to work through the Racial Equity Subcommittee to monitor the ongoing efforts to complete the school district’s equity audit. I will hold the administration accountable for its findings and ensure any suggested changes are fully and promptly addressed.  The audit is the best mechanism to discover and document problems related to equity; be it based on race, gender, wealth, neurological style or any other facet of a student’s identity.I will be persistent in advocating to build a school somewhere in District 8;  preferably a full elementary school, but possibly a small preK-K or preK-K-1.

3) Should Framingham Public Schools return to neighborhoods schools? Why or why not? Keep in mind there is no neighborhood school in District 8.

Absolutely not. Not until everyone has a neighborhood school and all schools are equally desirable.  Even then it is likely that the residual racial and economic segregation built into the housing patterns would translate into a level of school segregation that is ethically and legally indefensible.  Having neighborhood schools is a noble and worthy ideal.  But it is based on the premise that neighborhoods around the city have homogeneous distributions of people, resources, and political power.  We don’t live in a city like that.The current controlled school choice plan has many problems.  It is difficult for new parents to understand. It still hasn’t solved the segregation problems despite making many people feel that it has too much control and not enough choice.  The daily South-North/North-South bus migration costs the kids too much time and the taxpayers too much money. But scrapping it for simple neighborhood schools is not the solution and would be even worse in some ways.The solution is to build schools near where the students live.

4) Would you support the construction of a school on the Bethany Hill property? Why or Why not? If yes, what type of school?

Yes.  We need to build more capacity near where the students live.  The Bethany Hill property is the best parcel in the area. It is large enough to have some flexibility in the design and placement of facilities while maintaining some green space.  It is off the main commuter streets. Ideally we would build a preK-5 school there. Hopefully with some separation between the preK-1 and the 2-5 age groups.

I would recommend changing the policies around school assignment to 1) give parents more meaningful choices at more points during their child’s school career  and 2) achieve an equitable integration of children.A child arriving in Framingham after the April cutoff date should still have an opportunity to participate in the choice program and not be summarily assigned to the default school.  The elementary to middle school feeder patterns should be disrupted. It makes no sense to pick your child’s kindergarten based on something you want or don’t want in the 8th grade. It should be easier to transfer from school to school, even without an IEP,  as the needs of your child develop over the course of the years. Something in the assignment algorithm has to change to prioritize desegregation. The state could come after us again like they did before 1998. It is much preferable to take community directed steps than to take court ordered steps.

School bus rides are too long for the kids and create too many traffic snarls.

I would fix it by building more schools where the majority of the students live.

7) There is criteria to measure a Superintendent. Criteria to evaluate a teacher. How should you as a School Committee member be evaluated? What three things should voters hold you accountable for? Why?

I hope that voters will evaluate all school committee members based on 1) how well they serve the entire student population when performing oversight or setting policy, 2) how effectively and efficiently they allocate the school budget in service of the school district’s mission statement, and 3) how well the city educates the children who are difficult to educate.I hope that voters will not focus too much attention on  yearly test scores, or the “grades” given by the state. Those should be the starting point for any conversation, not the final criteria.  Multi-year trends are more meaningful than single year changes. The high stakes tests only measure part of what is important, and the demographic reporting for Framingham is questionable.  Highschool dropouts often come in clumps and it can be hard to get good root cause analysis for why it is happening and who is dropping out.   One wonderful thing about a democracy is that the elected officials don’t get to pick the criteria upon which they will be evaluated.  The voters get to do that based on what is most important to them at the time.