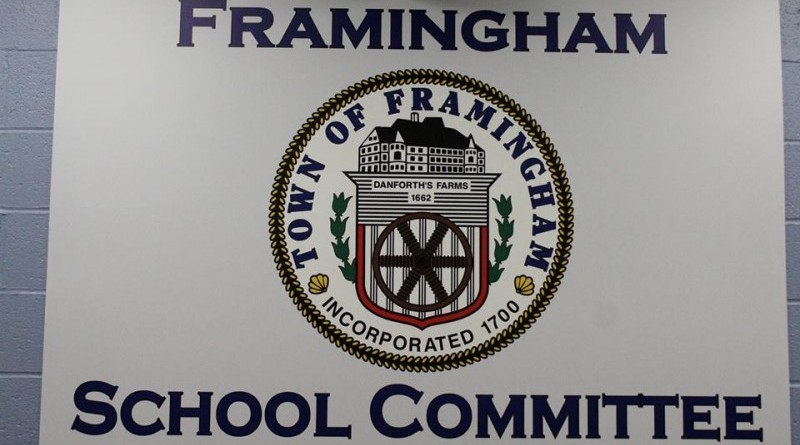 FRAMINGHAM – A member of the Framingham School Committee has been removed from the negotiating team for the Unit C contract, after allegations by union members.

Five of the six Framingham Public School unions have settled their contracts. The only contracted unsettled is with Unit C, custodial employees.

Epstein and Pascual have been on the Unit C negotiations team since February 2018.

“Legal counsels have indicated that this subcommittee membership appointment was a necessary and authorized action,” wrote Freudberg,

Earlier in the day, London wrote a memo to the 9-member elected School Committee, as well as Framingham Superintendent of Schools Bob Tremblay, which indicated Pascual was conducting in behavior not appropriate for an individual negotiating a union contract.

London informed the School Committee and Superintendent that “recently an employee who would like to remain anonymous for fear of potential retaliation informed Mr. Gadens, my Assistant Director, and me that a member of the School Committee, Gloria Pascual, has been going around to multiple custodians making offers about contract terms, and asking them how they feel about specific FPS employees.”

Editor’s Note: The memo is not marked confidential. It was sent to all nine elected School Committee members, which makes it a public document.

“The employee, moreover, indicated that Ms. Pascual was telling the custodians that she heard that the MOA was voted down and told the custodians to have the union president, reach out to her directly because she can give them what they want,” wrote London to the School Committee.

“I was surprised to learn in a group email that School Committee Chair Adam Freudberg had summarily removed me from a contract negotiation team without direct notification. His decision was based on anonymous, unfounded, and untruthful allegations which he never attempted to discuss with me beforehand. This action is in violation of the Framingham School
Committee policy Section K, policy KE – Public Complaints, which says no action should be taken on anonymous complaints,” said Pascual to SOURCE.

“The summary given to the School Committee and to the media pointedly left out my response to HR Assistant Superintendent Inna London when she first notified me of these anonymous and baseless accusations on June 20th (not last month as she stated in her email yesterday),” said Pascual on Tuesday morning to SOURCE.

The Framingham Public School District reached out to Pascual discuss the allegations made by the union members this summer.

“Legal counsel has indicated that these are serious concerns raised by FPS staff, noted they are allegations, but that this is counter to collective bargaining and ethics rules and practices, and would put the district at risk for unfair labor practice complaints and legal action(s) by the union,” wrote London.

The National Labor Relations Board has laws on union contract negotiations, as does the state.

“While there was no reason for me to debate the veracity of these claims or seek funding for a formal investigation, I felt obliged to inform Ms. Pascual herself (which I did last month) and to notify the School Committee, Superintendent, and legal counsel,” wrote London, who said she also provided Pascual with Framingham School Committee policies “which pertain to negotiations, chains of commands, as well as communications with FPS employees.”

“The District has been notified that the State Ethics Commission has been making inquiries into this matter,” wrote London to the School Committee.

“Due to statutory requirements for confidentiality that are placed on the Commission by State statute, I can neither confirm nor deny whether the Commission is reviewing any matter,” said the Massachusetts State Ethics Commission spokesperson Gerry Tuoti.

“After learning of a series of complaints this summer, school district legal counsels both independently said this change in subcommittee membership was an appropriate action to protect the school district. Acting to make this change is necessary because laws, ethics, transparency, and the integrity of the collective bargaining process matters,” said School Committee Chair Freudberg.

“Included below is my email response to Ms. London dated July 1st. The gist of my response was that the anonymous charges weren’t true and that if the HR department chose to go forward with an investigation, I asked to be notified. I never heard another word about it, and I thought the matter
was put to rest. Then there was yesterday’s shocking development which came more than two months later. The charges are false. The process that got the School Committee leadership to this decision is very flawed. The timing of this controversy is highly suspect,” said Pascual.

“I have contacted the State Ethics Commission to seek guidance on how best to address this heavy-handed attack on my personal integrity and ethics as a public servant,” said Pascual to SOURCE.

“I have written a letter to the chair of the School Committee requesting that I be reappointed immediately to the negotiation team for Unit C,” said Pascual.

The Framingham School Committee also has its own ethics policy for the 9 elected members.

“I am the chair of that subcommittee and aware of what is happening,” said District 6 School Committee member Epstein. “There is a posted meeting of the Unit C subcommittee on Tuesday at 4:30 p.m.”