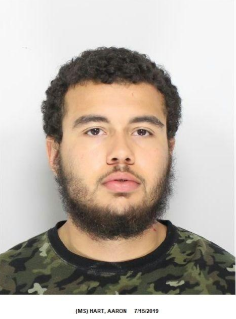 FRAMINGHAM – A Framingham man, 19, was arrested Monday after three individuals said he used pepper spray on them.

Framingham Police arrested Aaron Hart, 19, of 46 Pine Street on Monday at 1:15 p.m. at his residence. He was charged with three counts of assault and battery with a dangerous weapon (pepper spray).

According to court documents, Hart used pepper spray on two males and one female.

The incident took place at 130 Kendall Street in downtown Framingham.

The two teens and the woman were treated at MetroWest Medical Center.

According to court documents, Hart challenged one of the two male teens to a fight. When, they declined, Hart sprayed pepper spray into their faces.

Framingham District Court Judge David Cunis released Hart and ordered him to stay away from the three individuals who needed treatment from the pepper spray.