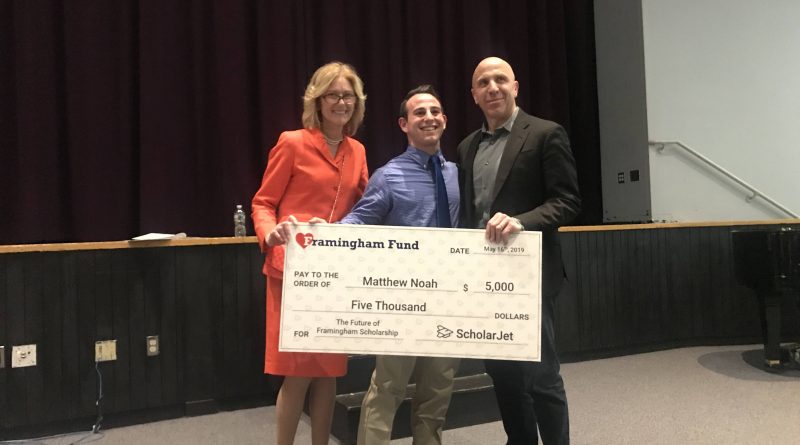 FRAMINGHAM – In its inaugural year, the Framingham Fund scholarship competition, a $5,000 Scholarship was awarded to Framingham High Class of 2019 graduate Matt Noah.

Noah, who will be attending Penn State this fall, won for his submission of a video highlighting his involvement in his community.

This includes his involvement in Framingham High’s Flyer News, a member of the football team, captain of the wrestling team, mentoring an elementary student at King Elementary School, and volunteering at his Temple.

Petroni submitted a presentation on creating the City of Framingham’s first-ever Youth Council.

Petroni, researched, wrote, and presented before the Framingham City Council legislation to change the City of Framingham’s charter to create a Youth Council, comprised of students ages 13-22.

Her ordinance became the first citizen developed ordinance passed in the City of Framingham earlier this spring.

After unanimous support from the City Council, Mayor Yvonne Spicer signed the Youth Council into law.

Last month, Petroni was sworn in as an at-large Youth Councilor. A total of 13 youth were appointed to the first-ever Framingham Youth Council.

Editor’s Note: In full transparency. Petroni is the daughter of the owner and editor of SOURCE.

Petroni was one of 10 finalists for the U.S. Senate Program in Massachusetts her senior year, and a member of Senate President Karen Spilka’s Youth Advisory Council.

Petroni will attend the University of New England in August, and plans to double major in Environmental Studies and Ocean Studies & Marine Affairs. She also wants to minor in GIS (Geographic Information Systems).

Petroni has been a member of the Framingham Homework Center’s Youth Advisory Council since its inception in 2012.

The Framingham Fund scholarship was run through ScholarJet and sponsored by Sophelle.

The scholarship was designed to focus more on actions than on a written essay.

“ScholarJet, a Boston-based education-focused startup that was co-founded by three members of Forbes 30 under 30, has recently partnered with the Framingham Fund to create an action-based scholarship competition awarding $5,000 in scholarships. This competition is exclusively open to students at Framingham High School. Instead of writing essays, the students are tasked to create a video or some sort of creative content discussing their involvement in the Framingham community,” explained Tuan Ho, CEO of Scholarjet.

Scholarship applicants submitted hard evidence of work they had done for their communities in a variety of formats. These submissions were judged for their impact, creativity, and resourcefulness.

Doug Weich, CEO of Sophelle, said about the contestants, “They did really incredible things… They’ll have a lasting impact.”

The scholarship was awarded in hopes that it inspires the winners to continue to be active in their communities.

Framingham Fund seeks to reward those who stand out for their actions, not just their words., said Weich.

In Weich’s words, “The whole idea is that it’s actually doing something rather than writing about something… [it hopes to] directly incentivize people to do good”