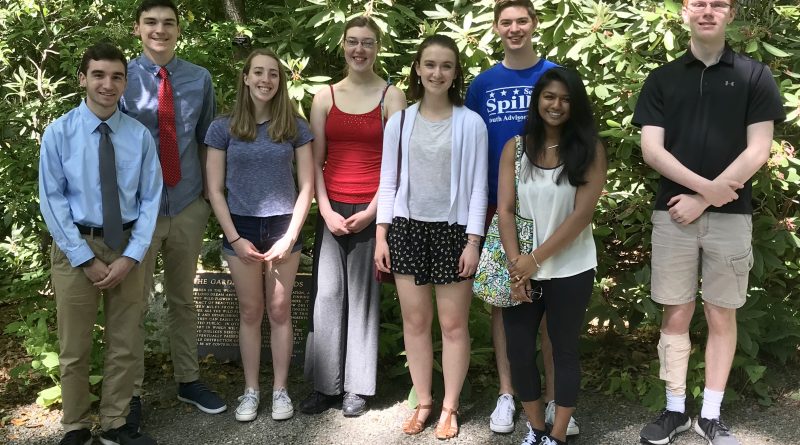 FRAMINGHAM — Massachusetts Senate President Karen Spilka’s Youth Advisory Council held its final meeting of the year at Garden in the Woods in Framingham on June 7.

The Council is comprised of 18 students from the MetroWest communities Senate President Spilka represents.

Puja Mehta, who is the District and Constituent Services Director for the Senate President, helped create the curriculum and identify ideas for the Council to work on for the 2018-19 year.

Mehta said Senate President Spilka, had the idea for the Council a few years ago with the purpose of connecting with the youth.

This year Mehta “told the Council members that they should break up into groups depending on what their interests were.”

There were four groups formed and each focused on an issue they felt was important. The four topics were mental health, the environment, education, and civic engagement.

The final session of the year, started with a tour of Garden in the Woods and proceeded with a discussion about the year.

Earlier sessions during the 2018-2019 year, included a tour of the Massachusetts State House, a presentation by the Foundation for MetroWest, and a visit to the newly-renovated Massachusetts Senate Chamber.

Many of the sessions were spent in Sen. Spilka office discussing government and legislation, and working on the student legislative bills.

Member Joseph Spurling of Natick had some takeaways from being a part of the Council, including that “relationships are definitely really important in government. It’s a lot of compromise between each other.”

Spurling also created relationships of his own within the Council including a new friend, Ashani Kurukulasuriya of Holliston.

Kurukulasuriya is also thankful for the friendships she made and has learned more “about the legislation process” and “the importance of public speaking and being able to convey a certain idea and being able to have the idea appeal to a large group of people.”

These tools come in handy when the Council discusses important issues amongst each other and elected officials.

Spurling, Kurukulasuriya, and all the other Council members are what Puja Mehta would describe as intelligent, “very dedicated and passionate people.”

She is a big supporter of them all and is extremely proud of their accomplishments.

The Garden in the Woods session concluded with a visit from Senate President Spilka.

She left the Council members with some words of gratitude: “You are why I do what I do. As corny as it sounds it’s very true. You are our future and I have to say the future just makes me smile knowing that it’s in your hands.”

Spilka then handed each of the members official citations from the Massachusetts Senate as a thank you for all their hard work.