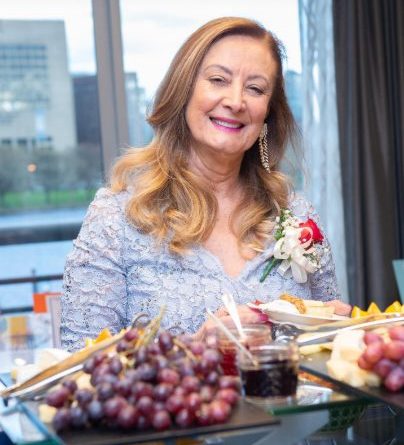 Updated with video on May 7.

Massachusetts Alliance of Portuguese Speakers presented its Person of the Year award to District 7 Framingham City Councillor Margareth Shepard, who made history last year by becoming the first Brazilian immigrant elected to a City Council position in the United States.

Shepard had already served the community for several years as an advocate for immigrant rights and democratic engagement through her roles as a Framingham Town Meeting member, at BRACE, the Brazilian American Center in Framingham, the group Brazilians for Political Education, and other organizations.

Addressing the audience of more than 440 community leaders, entrepreneurs, public officials and MAPS staff and volunteers, Shepard thanked MAPS for the recognition and highlighted the importance of becoming a citizen and engaging in the political process.

“This honor goes to the hundreds of thousands of Brazilian immigrants that chose Massachusetts as their home,” Shepard said. “To be fully part of a new country is a collective action, and passing legislation that benefits our community is a good start. Let us now bring our strength and enthusiasm to the next level. Let’s elect our own leaders – let’s be part of the government.”

Fernanda Rocha, a Brazilian advocate, founder and president of a support group for Brazilian mothers of autistic children in Everett, received the MAPS2019 Manuel N. Coutinho Outstanding Volunteer Award, in recognition of her volunteer work and dedication to families with children with special needs.

Speaking in English and Portuguese, Rocha moved the crowd with her incredible story of strength and dedication.

“I want to thank my husband, who has always supported me so that I could have the flexibility to keep going on my journey; my sons, Lucas and Raphael, who are the reason for all of this; my friends and all the mothers from our group who nominated me. I dedicate this award to all of you!”

The duo was instrumental in raising crucial funds to support the MAPS Cambridge Senior Center, including donating the entirety of the profits of the bar during the Boston Portuguese Festival, held in June, 2018.

“We want to echo all the kind words that have been said tonight about MAPS. Thank you,” said Walter Sousa. “Long live MAPS, long live the Senior Center,” added Joseph Cerqueira, who was surprised by his daughter Raquel Furtado, who joined Matheus Lima, Álvaro Lima’s son, to present the award.

The family founded the Joe & Dorothy Chaves Foundation in 2010 in honor of the family’s patriarch, the late Joe Chaves, a popular and philanthropic businessman.

The foundation holds an annual 5-K Walk/ Run in his honor that raises funds to support several scholarships, the MAPSCitizenship services, and the Bunker Hill Community College, where Joe taught.

“Joe gave so much of himself to the community. What I remember most about him was his sense of humor,” said Dorothy Chaves, as she reminded guests of “how seriously Joe took his own educational goals”, while still taking the time to be involved with the community. “I want to thank MAPS and the entire Rogers family for all that they do for the community,” she added.

Speaking in perfect Portuguese, Jake Chaves, Joe and Dorothy’s grandson, recalled his love and admiration for his family. “I’m very proud to continue the work that my great-grandmother, Virginia Simas and my grandparents started, and I hope to always work for the betterment of our community,” he said. Philip Chaves then took the podium to thank MAPS: “Our family is blessed, and we hope that we have given back as much as we’ve received from this great community. We salute all of you and asks you to do whatever you can to support MAPS. Keep protecting our shared language and culture, as well as those in need,” he said.

The Boston Police Department’s Cabo Verdean Police Association was honored with the MAPS 2019 Jorge Fidalgo Community Service Award, and Luis Anjos, the groups’ president and founder, took to the stage to receive the well-deserved award.

The group was founded in 2014 with the mission of addressing problems in the city’s Cabo Verdean community, and aims to overcome language barriers, promote youth development and provide mentoring.

“We are blessed to receive this award named after Jorge Fidalgo, a wonderful business and community leader who always supported our community,” said Anjos. “We wanted to follow in his footsteps and put together a group that’s going to help the community, help our kids and seniors, and improve communication between the police and the Cabo Verdean community.”

Executive Director Paulo Pinto, who celebrated his 25th anniversary at MAPS, and Board President Susan Pacheco congratulated all the honorees and gave special thanks to all the staff, Board members, business sponsors, media sponsors, advertisers, donors, guests and entertainers who made the Gala a great success.

Representing the generous group of Dunkin’ sponsors, Salvi Couto, President and Principal of the Couto Management Group, took to the stage to present the Diamond Sponsor Greeting. “Some of our Diamond Sponsor members, including the Carvalho, Rodrigues and Couto families, have been supporting the MAPS Gala for more than a decade,” said Couto. “Together, we are honored to contribute $40,000 to support this year’s MAPS Gala. The Diamond Sponsor Dunkin’ franchisees want to thank MAPS once again for all you do to serve and empower the Portuguese-speaking communities of Massachusetts.”

From its “paparazzi”-lined Red Carpet to its awards ceremony, the black-tie-optional Gala was a festive evening punctuated with entertainment from the Portuguese-speaking world. Distinguished guests were greeted by the warm rhythms and sounds of Brazil, Portugal and Cabo Verde performed by David Ramos & Band, as they took their seats for dinner in the elegant Royal Sonesta Hotel’s ballroom.

Following the Awards ceremony, guests got to show off their dance moves at the Gala’s after party that ran until midnight under the command of the award-winning Melo Musik team.

Photos and report submitted to SOURCE for publication